Breed All About It: Rocky Mountain Horse

Today we're going to take a look at another uniquely American breed of horse, the Rocky Mountain Horse.

The Rocky Mountain Horse is a gaited horse... meaning that it has a natural way of propelling itself across the landscape that fits a particular rhythm and is, reportedly, quite comfortable to ride for long periods. This gait is- regardless of what breed of gaited horse we're talking about, and there are several- faster than a walk, more comfortable than a trot, but not as fast as a lope, or canter, if you prefer. The Rocky Mountain Horse is required to have a four-beat gait, meaning that, like at the walk, each hoof strikes the ground individually, rather than any two legs striding at the same time, as with the lope, which is a three beat gait. This gait is natural, present from birth, and cannot be taught. Each horse has its own "way of going," meaning that no two horses will have precisely the same gait or speed. Rocky Mountain Horses have been known to gait at up to twenty miles an hour.

In the late 1800's a stallion emerged into the limelight of the Kentucky horse world, which at that time was far more practical and far less race-focused than it is today. This horse came out of the Rocky Mountains, and was called "The Rocky Mountain Horse."

Other than his unusual coloring, and the fact that he was bred to a geographically small sampling of gaited riding horses in Kentucky, that's pretty much all that's known about the stud who gave rise to a handy little breed.

I mention the stud's coloring, because the rather startling colorations available in the breed today are one of it's most recognizable features. Since we're talking looks, I'll show you some pictures. (It has nothing to do with the fact that I think Rocky Mountain Horses have some of the neatest coat colorings in the horse world. Not at all. So hush.)


Above is a particularly striking example of the dark body/flaxen mane coloration that is such an amazing first impression of the breed. More common is the chocolate/flaxen combination: 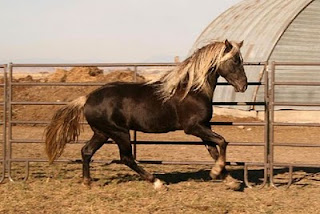 More pairings of bold body colors with flaxen mane and tail are apparent in the breed, although by no means are they all so strikingly colored. A Rocky Mountain Horse can be any solid body color, according to breed standards, and facial markings are acceptable if not "excessive." No white markings are allowed above the knee or the hock, however.

The color combinations seen above are examples of a particular expression of the same gene that makes a horse dapple gray. In some horses (as a breed, notably, Lipizanners, but the gene and this expression of it are apparent in many different breeds) the gene can cause them to fade from a more standard coat color, gradually over a lifetime, to a washed out dappled shade of their original color. In others, it simply creates a ghost of dappling in the coat, and still others are born dapple gray.

Other standards for the breed include height, (between 14.2 and 16 hands*) and notably, a good temperament. Very few breed standards include temperament, considering that to be an area in which bloodlines can be allowed to differ.

Since the Rocky Mountain Horse was a very utilitarian breed, its numbers plummeted with the advent of better roads, automobiles, and tractors. At one point it was listed as an Endangered Species.

Today, though, the Rocky Mountain Horse Association is dedicated to preserving and propagating the sturdy little beasts. While they're not anywhere near as common as Quarter Horses or Thoroughbreds, they're making an impact in the world of the pleasure horse, as sure-footed trail horses and gaited show ponies.

* 1 hand = 4in. This measurement was originally, much like the cubit, more haphazard, being the breadth of a man's hand.

** Second image ganked shamelessly from Hidden Trails.com
Posted by FarmGirl at 6:30 AM

Thanks for the Breed All About It - as it's painfully obvious I know so little about horses I don't even know how ignorant I am!

I hadn't seen one of those in YEARS! Matter of fact, I'd pretty much forgotten about them... Good post, thanks!

I've never HEARD of these! How striking and beautiful they are. Amazing.

I remember seeing one, a black with cream mane and tail years ago when I was riding in shows. Haven't seen one like that in ages.

I'd heard of Rocky Mountain Horses, hadn't really understood what they were talking about. So, thanks for this one, Farmgirl.

This looks like a horse I could get along with. I don't know about showing a RMH in my part of the country, but I'd be interested to see how smooth they ride.