DM has been out of town for a few days and it's been awful lonesome around the house. I've tried not to mope about it because that only makes it worse.

But he's coming home tonight, so I'll probably be spending the evening finding a way to glue myself to him, my cuddle meter is running really low.

My knees have been aching lately, thanks to the barometer doing a reasonable impression of a roller coaster, plus the rib on my left side that responded to me trying to ease the pain in the cracked rib on the right side floating out of place and throwing everything out of whack. ("does your rib hurt tonight?" DM asked me the other night, "A little, why?" I responded. "Because it looks like it's trying to jump out of your back." )

Anyway, I recently had a couple of friends to visit, one of whom is an anthropologist. We spent a couple hours in the car, followed by several hiking up and down a mountain, followed by a couple more hours in the car. Home again for pizza and alcohol until late in the evening, at which point I mentioned that my knees were feeling a little sore.

And demonstrated that the swelling (minor, for what it has been in the past) would bulge out the other side of the knee cap when you pressed on one side. Absentmindedly I started rubbing at my knee and the anthro gal suddenly cringed. I realized then that I'd rubbed my kneecap off to one side... yeah apparently that's far more disturbing than the swelling thing.

We then spent some time with me demonstrating the things my knees will do that they apparently aren't supposed to and still let me stand up, and I've been told that if I ever make it to Albuquerque anthro gal knows a couple people who would love to x-ray me. Or maybe cat scan. Cause apparently my knees shouldn't let me stand up.

The orthopedic surgeon's daughter just cocked her head to one side and commented that she'd be interested in seeing how the muscles surrounding differed from "normal" in order to compensate for the instability.

I do think making the anthro gal cringe and get all squicked out means I win forever, though. I am a little worried that if they ever manage to get me in front of an ortho to demonstrate that I'll wind up in surgery before you can say "knee replacement."

Well, since we reached the halfway point and that was enough for the tank and the filter for the turtle, I decided to go ahead and pick that up today while I was off work. Since I promised you lovely people who donated a chance to see the new digs once I got them, I made sure and took pictures. 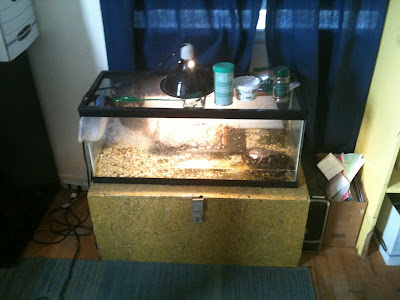 And here's the shiny new one: 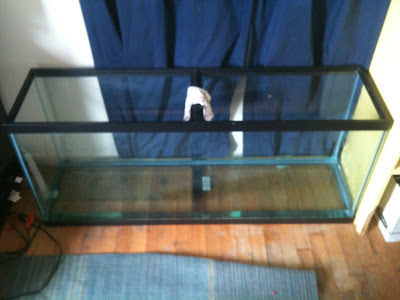 Bit of a difference there, I think. Well after much wiping (the new tank is used, and I wanted to clean it thoroughly before putting the turtle in, so there was much bleaching followed by much dechlorinating) and much hauling, because at five gallons a trip it takes a bit to fill that big sucker even part way up, we get this: 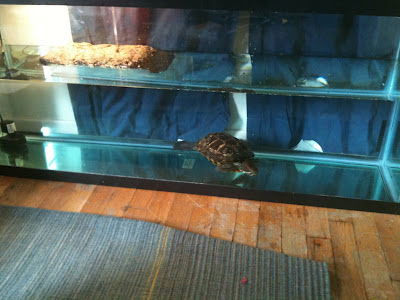 I think she's going to like it once she gets the whole "I can swim" thing figured out. We plan on getting some bigger rocks to build up a good land area on the right side, at which point the floating basking platform will go away since it's only mostly useful at best. She's too heavy for it to be really useful, it doesn't have quite enough float to it and all the things I can think of to make it float better involve things that she might eat or that can harm her. 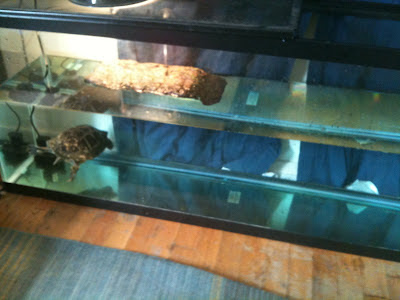 No substrate yet, she'll get along ok without it for a bit, though I would like to get her some, traction when she's trying to walk across the bottom is nonexistant, of course, and it does help with the biological filtration to help keep things clean and happy.

We're getting there, though. Slowly, but surely. I am far more pleased with this set up than the old one, though the turtle isn't entirely sure about that yet, I think she's gonna wind up much happier and healthier in her new home.
Posted by FarmGirl at 1:37 PM 4 comments:

Halfway to "just go buy everything at once" on the turtle house, and cruising for deals on the bits I expect I might be able to find a bargain on.

I know I say this a lot but my readers are totally awesome!
Posted by FarmGirl at 9:37 AM No comments: