Monday was a banner day for me. Farmdad and I took a road trip up to see Salamander and play in the funshop he works at.

See for all of my untold years I have bought several weapons for Farmdad, Farmgirl and the son and grandson and had bought myself a rifle or two but had never bought myself a pistol. I've had several over the years. Some were gifts. Sometimes Farmdad would come home with something new and tell me "honey look what I got for you!!" thinking that would keep him out of trouble and some were just flat stolen from him when I particularly liked something he came up with.


After fighting with Workman's Compensation for over two years they decided that I was due a small (very small) settlement. I got said check in the mail a couple weeks ago and was trying to decide what to do with it when life went "Rodeo" around here.

This weekend it hit me what I wanted to do with it. I was gonna buy a pistol for myself. I mean what else would be as satisfying? What else would help get rid of the stress of the last several months than turning money into smoke and noise? I needed some recoil therapy and it would be so much better with a new toy.

The shop Salamander works at always has a very nice inventory. I figured I could find something there that just begged me to take it home since every time I go in there I have to wipe the drool off my face. I still couldn't afford some of the pistols they always have there but was sure something would catch my eye.

We arrived shortly after the shop opened and I ran Salamander from display case to display case looking at this one and that one. Eventually I narrowed the choices down to 3 or 4 different pistols and of course they were all in different areas of the store. Needless to say I finally made my choice and Salamander started the paperwork.

This is what I ended up with. 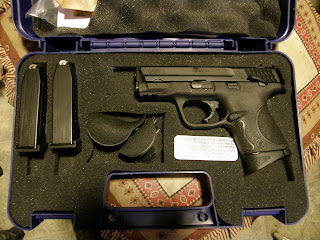 A Smith & Wesson M&P 9. No it's not flashy. No it's not anything anyone is gonna squee over. But it felt nice in my hand (after we changed the backstrap) and it talked to me. It wanted to come home with me and be my friend.

I also got Farmdad a Ruger 22/45 for Christmas, which he got early since he was along and actually picked it out for himself.

We stopped on the way home and ran some ammo through both of them and I am extremely pleased with my new little friend. The recoil is just barely there and the darn thing shoots very well. I was hitting quite well with it from the very first round. I don't have anything on paper since we just stopped on a country road and just threw a couple soda bottles out there for targets but the soda bottles looked a bit ragged after just a couple magazines. It is a very FUN gun to shoot and I am quite sure I will use up the remainder of my stash of cash buying ammo for it.