Farmdog is still treating the puppy like he might break if she looks at him too hard most of the time, but FuzzyPup has started to interact some, letting the pup climb on him and chew on his ears a bit. He's at the stage now where he'd like to play with the puppy but isn't sure he won't hurt him, so it's a little awkward. 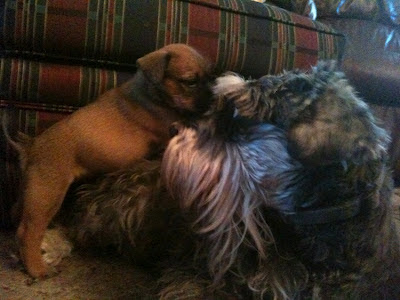 The Little One is full of piss and vinegar and still has about four settings, eat, sleep, poop, and play. He's figured out that going up the stairs is a desirable thing but hasn't quite figured out how to do it yet, today he cried when the big dogs left him behind, and when I went out he had his front feet on the bottom step into the house.

He's eating like crazy and growing so fast I swear he's bigger every time I look at him. He also has a growl that is almost as deep as Fuzzy Pup's already, which makes me think he's going to sound like a thunderstorm when he actually gets grown up.

Mostly, I just wanted to share the pic, cause it's cute.