In the midst of paradise sits an area that still bears the scars of an attack that happened sixty nine years ago.

If you know where to look or are lucky enough to have a good guide (and I'm not talking about the kind of guide that wears a parks uniform) you can still see bomb craters, and bullet holes. 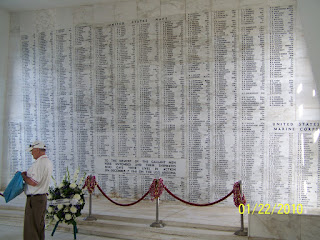 Men who lost their lives while serving their country, and all of those throughout the ages who didn't get an elegant memorial with their names engraved in marble. The soldiers of our country who fight and die even today to protect our way of life. Whether you agree with the orders or not, they follow them. They hold their heads high and rightfully so. 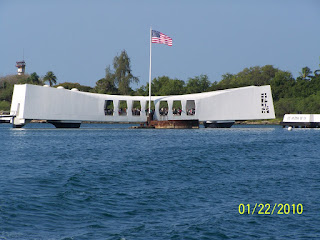 There's an eerie sense, approaching the memorial. Not as if the ghosts of sailors still hang around, but more as if the reverence of everyone who has gone before you has left a residue. The white shape against the blue water is a stark image, with our flag flying above the fallen. 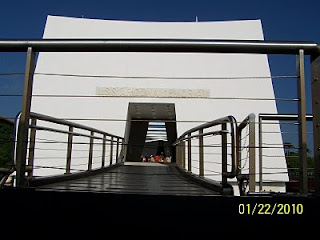 The entrance feels like you're walking into an ancient temple. A place where the gods and the spirits of the dead just might communicate with those of us here on earth.

I won't post pictures looking down into the water. It's something that should be seen in person. The slick of leaked oil throwing rainbow colors across the surface of the water, appropriately called Tears of The Arizona. The fish gliding above the deteriorating, encrusted metal. For me, there's a sense of sorrow, grief for men I never knew.

Mom's great-uncle was one of the men lost on the Arizona. He lies somewhere beneath the surface, along with the shipmates he died with, and a few who, having survived the attack, chose later to be interred with their brothers.

Everyone knows the Arizona is still there. Not as many realize that the USS Utah still sits just off Ford Island. Unlike the Arizona, the Utah was rolled to one side of the channel, to allow her sister ships to come and go. 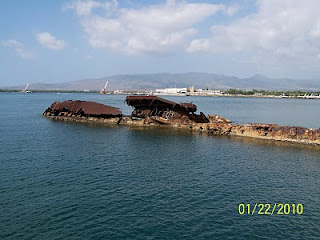 Her memorial may not be as famous, nor as well-traveled, but it is no less important. If you get the chance, visit her, and pay your respects. Utah's memorial is less overrun, more peaceful. It holds the same sense of reverence, however, and perhaps a touch more melancholy.

I'm grateful that I have had the chance to visit these places. I hope my nephews do, as well as any children I might have. It's a place to give honor and acknowledge sacrifice, for the men who died there, who rest there, and for the men and woman who fell elsewhere, at other times.

Throughout the history of our country brave men and women have fought and died for the things they believed in. For those of us at home, so that we may not have to face the things that they do.

Never forget that. Never forget them, or forsake those who are facing the possibility of joining their ranks even today.
Posted by FarmGirl at 8:34 PM 6 comments: Links to this post

From Colorado. Yep, we're home. We got home a few days ago but it's been a rush of catching up and I didn't have pictures to share with ya'll so I figured I'd wait till I got them to post. So now, here it is, a short picture tour of Hawaii, Farm Fam Style. 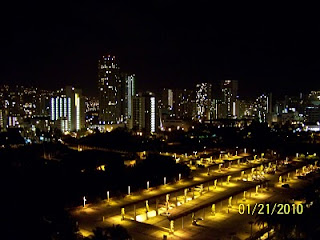 This was the view off our balcony (or lanai) at the hotel, the very night we got there. After five hours of delays in Denver and an eight hour flight, it was the most beautiful thing in the world to us, even though it was dark. Especially considering we weren't wearing coats. In January. At night. Oh Gawd why did I come home? 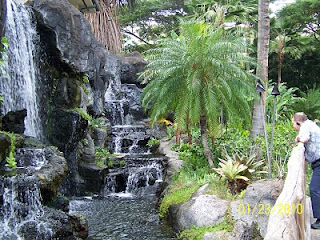 Another nifty perk of our room was the it was directly above the waterfalls on display at the front of the hotel, so when we'd get back to the room of an evening we'd sit on the balcony and listen to the waterfalls and stare out over the city for a while. So very relaxing....

On Thursday we went to the Sea Life Park, which is cheesy and touristy and quite a lot like a cut-rate Sea World except without the whales. But, we were tourists and they do some nifty dolphin and sea lion shows and there's plenty to see, so we went.

First up was the Ray Ballet: 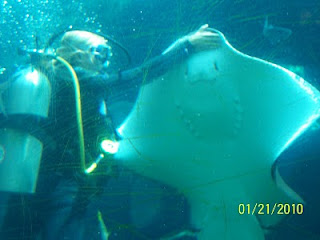 Considering what happened to Mr. Irwin I think this chick is both brave and smart. She climbed into a tank with huge stingrays, but she brought bribes. I figure it's kind of like working with the mob when they're running a protection game. Pay em off, and you don't get hurt. 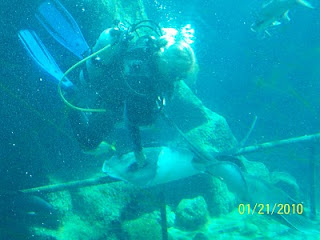 The rays of various types were quite cooperative when it came to showing off for the audience, and it was beautiful to watch them glide around.

Then, the sea turtles, right at the exit from the ray tank. This is what happens when you throw all the food in one area during feeding time. It's a slow motion feeding frenzy, a turtle pileup: 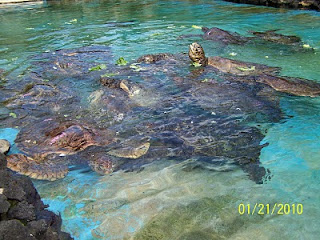 Since they sell turtle food (lettuce and broccoli) in the gift shop, the turtles are quite willing to wander over to anyone in the vicinity of their tank when they're not getting their big meal, and pose for pictures in the hopes of getting snacks. 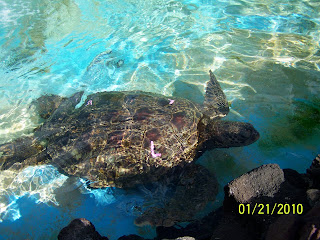 Of course, no sea park is complete without sea lions, and in addition to the Miss Sea Lion Hawaii show in which they showed off their tricks they had an area where the sea lions just kind of hung out. It's not hard to guess why this guy wasn't involved in the choreographed show, since every time someone would walk by he'd make his opinion of tourists well known: 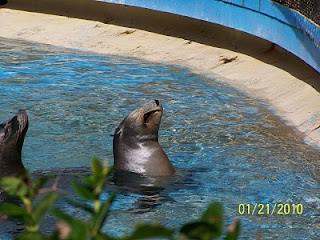 They also have a quite unusual animal at the Sea Life Park. I didn't know it was possible, but apparently dolphins and whales can cross breed. This one is the result of an accidental breeding, born right there in the park. She's called a whalfin and she was the star of the show: 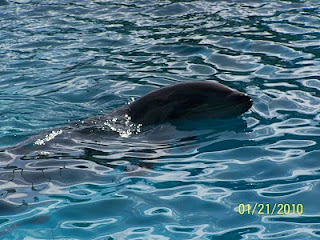 A lot of the rest of the trip was sightseeing and enjoying the views. I have a ton of pictures, but to keep this short I'm breaking part of it off into another post and giving you one of my favorite vistas: 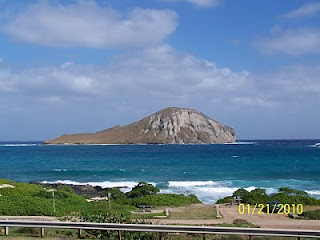 Also, the (in)famous Waimea Bay, which is reportedly normally a surfer's paradise, but which was flat as the Colorado plains the day we visited: 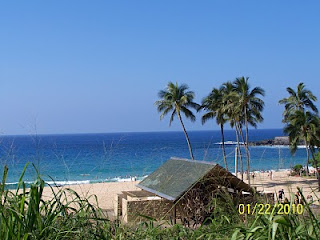 On our last day, we checked out of the hotel, checked our luggage, and got some more quality beach and park time in. I was pouting about having to leave this beautiful place, and one of the local birds came to console me. Or see if I would break the rules of almost everywhere in Hawaii and feed it. One of the two. 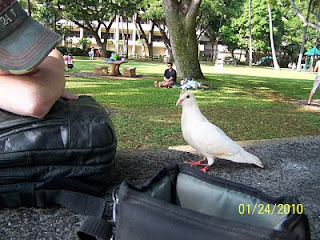 Posted by FarmGirl at 8:23 AM 3 comments: Links to this post