Just checked my sitemeter and I broke 10,000 visits today!!!

Oakland, California, congratulations! I don't have a book to give away, but if you want to, email me at the address on my profile, and I'll write an entry on the subject of your choice.

A big thank you to everyone who reads, I'm just overwhelmed with the response I've gotten with this thing, and I really do appreciate each and every one of you. Not to mention the ego boost I get when I break a hundred visits a day!
Posted by FarmGirl at 8:16 PM 5 comments: Links to this post

I got better pictures of the fuzzballs, so I thought I'd share the cuteness. They're already climbing all over their momma! 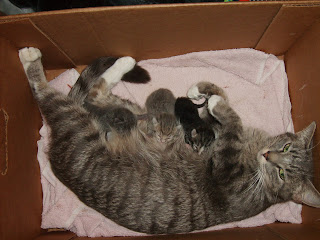 And in spite of the evil look she's giving above, she was really purring while I was taking the photos.... the evil glare is for the flash. 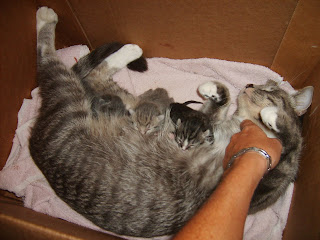 She loves being petted while she's nursing, and goes into full bliss limp-kitty mode when you scratch her chin or rub her belly.

Aren't the fuzzballs just adorable though??

Oh, and clicking on the pictures will take you to the ginormous versions, which shows the cuteness even better!
Posted by FarmGirl at 7:49 PM 1 comment: Links to this post

I heard this one again today. People seem convinced that I have some kind of eating disorder, and depending on the personality of the person involved, offer helpful advice, accusations, or in one case, a nice ham sandwitch.

Those people have never seen me eat. Ask the Farmparents, if you like.

Tonight, for dinner, I just finished a ten-ounce steak, a can of green beans, and half of a package of Lipton Noodle Sides. Not half a serving, half of the total amount produced. I'll finish off the rest of it in a few hours for a before-bed snack.

Yes, my metabolism is that high. Now imagine how I feel when I eat like that and step on the scales to find out that I've actually lost a pound.

Frustrating. There are times that I'm just not hungry, and I have to force myself to eat, lest I fall off my horse from fainting.

And then there are times that I eat like a pig, as evidenced tonight. And even during those times (sometimes especially) it seems like it's a constant battle to maintain my weight, which is low enough anyway that every time I go in for an annual check up, they test me for anemia.

I guess some people just have to find something wrong with everyone else, right off the bat. They don't give the person a chance to display their own faults, which people almost invariably do, they just pick something, and harp on it.

Fine, I'm skinny, and you feel that you're over weight. Tell you what, why don't you get off your butt and exercise, and I'll go over here and eat snack cakes and sit on my ass for a while. Eventually, one of our weight situations is bound to reverse itself, but I'll bet yours does before mine.

Aggravating, and funny, at the same time.

But Damn, that dinner was goooood.... I feel like a little piggy.
Posted by FarmGirl at 6:03 PM 9 comments: Links to this post

Shoot Him First. No really....

In my lit class, in the back corner of the room, there sits a guy that is the poster child for the "I want to be a lone wolf, and so do my friends" movement.

He's also the type to think he knows everything because he spends all of his free time in his parents' basement studying and eating ho-ho's.

Usually I can blow off his attitude that he's always right, because he doesn't point it at me often. He's tried it a few times, and hasn't been able to support his theory as well as I could, which of course made him feel insecure and doubt himself, which made him run home and eat more ho-ho's.

I really don't like this twerp, in case you hadn't noticed.

Meanwhile, yesterday we were discussing our next paper, (character analysis) and the one after that, which is supposed to be a literary argument, but which has been changed, thanks to the instructor, to a paper about a banned book, play, or poem.

I'm all for this, I despise the practice of banning something. If an elementary or high school feels something isn't appropriate, yes, they have the right to not have it on their library shelves or in their classrooms. But don't tell students that they can't read it. I see a difference between a school choosing not to have something in the library, and a school "banning" something. Mostly it's a difference in attitude. If a school chooses not to teach a book in a classroom, or put it in the library, that's an educational decision that the people who run the school have the right to make. "Banning" something, however, is an attempt to intimidate students into ignoring the work. If I carry a "Banned" book onto a campus, elementary, high school, or college, will they kick me out? If I give my nephew a banned book to read when he's in high school, and he reads it at school, will he receive disciplinary action? It's possible. Some people are so touchy about the smallest crap that they don't even want their children seeing the covers of these "inappropriate" books.

And colleges banning things is just stupid, we're all legally adults, even if some of the students don't act like it. Allow us to make our own decisions. And if someone gets offended by a book? Well, here's a hint... don't read that book again! If you really feel strongly about it, don't read that author anymore! Then you won't be offended!

But I digress, we were discussing this, and by extension the movie ratings system, which led to a discussion of violence and video games, which led, inevitably, school shootings and Virginia Tech.

This conversation followed the subject of VT being raised. The other participant is the chunky young man with the smarter-than-you attitude I mentioned at the beginning of the post (see, there WAS a point to that!)

Farmgirl: "Are you shitting me? This dude was bug fuckin nuts long before he ever started playing Counterstrike. Did you even know what game he played? Dude had a god complex, and a persecution complex. The game gave him a framework, but if he hadn't played that game he would have based his little fantasy world around a movie, or a book. The real problem with Virginia Tech was the victim mentality. One person fought back, and barred the door. It was an old man, a holocaust survivor. Everyone else just laid down to die, instead of fighting back"

ISTYA: "It wouldn't have changed anything if they had fought back, he had a gun. He wasn't going to stop shooting people because someone hit him."

FG: "Oh, give me a break. The guy had this mental defect that he was unstoppable, untouchable, if someone would have jumped his ass in the hallway while he was reloading, it would have shattered his little fantasy. Not to mention they could have taken the guns away from him, and it would have been stopped, right there."

ISTYA: "The police were on the way. They did what they were supposed to do."

FG: "So they were supposed to allow themselves to be killed?? Instead of taking a stand for their own personal safety, wait for help to arrive who knows when? You're all about taking a stand for intellectual freedom, and you're throwing around buzzwords like thoughtcrime, and censorship. How's this for a thought crime: Our country, and our youth, has been conditioned not to defend themselves. People die every day because they're so brainwashed with "don't hit, Timmy, it's not nice, even when they hit you first" that they can't even conceive of the fact that they have a right, and a responsibility to do everything they can to defend their own life and well being. Women are raped because it's not lady like to hit, or scratch. You want to stand up for your rights? Don't pick the ones that are convenient for you, it's all or nothing."

ISTYA: "So you're saying we should charge an armed man, if he walks through that door right now."

FG: "I'm saying that everyone should defend themselves to the best of their ability, as much as the circumstances allow. I'm saying that no one should just lay down and die because some nutjob decided they should."

ISTYA: "Well, I'm not going to charge an armed man. I would try to talk to him."

FG: "Tell me something, were you born without balls, or were they removed surgically?"

The instructor changed the subject, after that.....

When we were walking out of class, he started muttering under his breath as he was walking behind me. I caught the words "gun nut" and simply turned around, looked him in the eye, and called him a pansy.