Huzzah For Water! And Oops!

So, we've gotten some rain the last few weeks, and we're really glad of that. Upstream in our little water shed has gotten quite a bit more, and it flooded one of the creeks and filled up the lake. For perspective here's the lake about three months ago: 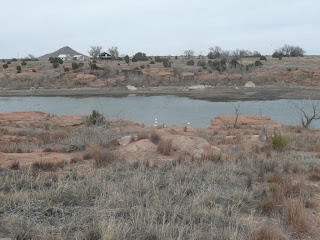 And if I can't walk across it in that picture it's only because the bottom is silt and I'd get stuck.

And this is yesterday morning. For perspective, the picture below is 90 degrees rotated from the one above, taken from just out of frame to the right. Make note of those rocks in the background above. If you can't really tell, they're vertical, and yes those are houses on top of them and set a little back. 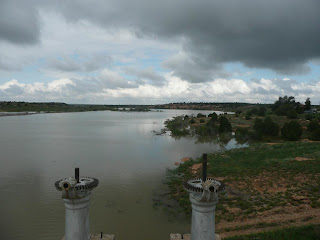 Because you ain't a gonna see 'em no more. This is looking out along the "background" shore in the previous picture. As you can imagine in our drought-stricken area, everyone is overjoyed. Unfortunately the dam that makes this a lake instead of a creek bed is elderly, kind of decrepit, and needs some love, so we can't hold all that water in there. They had to open the gates (yes those are the controls for it in the foreground) and let some out, till it gets down to the level that the dam is rated for. Twenty vertical feet, if you're wondering, though they're talking about getting some more repairs done so that it can be re-rated for up to 46 feet, which I am entirely in favor of.

Not least because of this next bit.

A bit of history, bear with me. The dam, lake and all was originally an irrigation set up, so on the side of the dam opposite the lake there's an irrigation canal leading off to... well these days it just sort of peters out. The cool bit is the tunnel they blasted through a cliff wall rather than go around it.

Over many, many years (more years than I've been around) the canal was neglected and trees grew on it and weeds grew in it because there was never any water running through it so why bother? We never got enough in the lake to worry about and for several years the gates didn't work anyway. They did get those repaired, clearly, but the fruits of other neglect have been realized.

Here's the canal from about midway between the headgates and the tunnel: 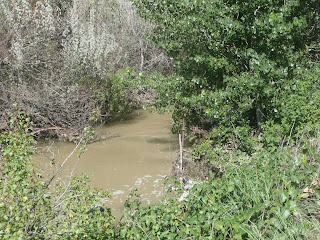 Peaceful, no? Muddy, sure, but looks like it's pretty sedate and if you're young and dumb it might be something you'd want to throw an inner tube in on and float down with a beer.

Which would be a very bad idea, because the neglect and letting trees grow on the berm between the canal and the (lower lying) recreational area bore fruit: 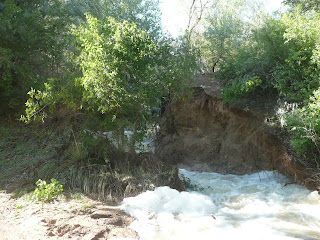 Can't see it super well there can you? Let me pick my way to a better vantage point.... (and for you worry worts I promise you I was never in the water or on any piece of bank that had been undercut... No seriously I was careful I know what kind of shit got washed through there, what I don't know is how much of it lodged somewhere) 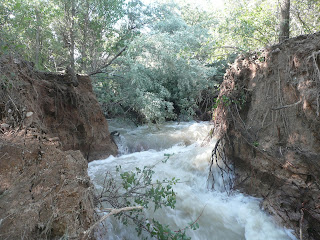 And there you have it. The water level in this pic is about 2.5-3 feet below the soil level of the ditch beyond the cut, so there's no fixing it until they can shut the gates, and they can't do that until the water in the lake is at the right level.

Oh, and that recreation area I was talking about? It's over there: 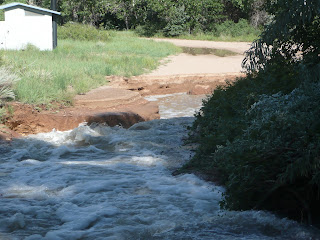 On the left is the state-installed campground potties. The light dirt area over there is the road in and a turn off for one of the ponds, and... well pretty much everything the water is covering in the foreground is the road in as well. And there's no one side or the other to it, the whole road has turned into an impromptu miniature whitewater location.

And today being the first sunny Saturday since the lake filled up, everyone who had a boat was out there. Most of the flood muck has settled, so it's safe enough, though some didn't want to wait and were out there yesterday. Also anyone who had a car was driving out to look at it. Biggest traffic jam in southeastern Colorado history that didn't involve a wreck and it's in the sticks and all because someone stopped on top of the dam to gawk at all the water.

I gotta admit, it took some self-restraint for me not to just jump in the lake fully clothed screaming yeehaw, but I'm eagerly looking forward to getting one of our modest watercraft up and running to go enjoy it. And if I get too impatient there's always the fiberglass canoe, if I can find the paddle....

Posted by FarmGirl at 9:18 PM 4 comments: Links to this post