So, the fishy project is well under way. I have one round of babies (best count is about nine) that are growing quickly, and one female getting closer and closer to spawning some more. Unfortunately it's proven rather difficult to get good pics of baby fishies. They're just too tiny and quick to get reliable photographs. 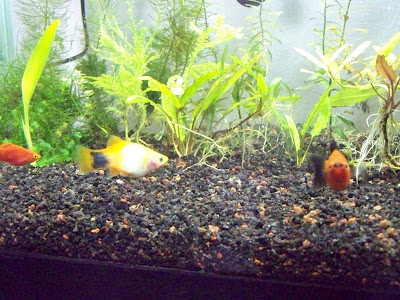 On the left is the male, and yes, he's much smaller than the females. He's a red Mickey Mouse, you can't see his markings in this photo, but they're subtle and sort of cool looking. The yellow female is a Marigold Variatus Mickey Mouse, and the red female is is a Red Wag, no mickey mouse markings. 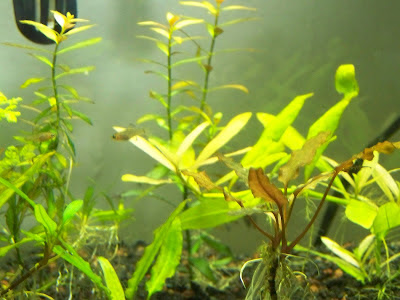 Seen above: A baby! Some of this batch are staying yellowish/clear like this one, but several of them are looking grey and reddish, which blends into the gravel. Some are also growing much faster than others, there are a couple that are veritable giants compared to the others, but they'll all end up turtle-snack sized eventually. 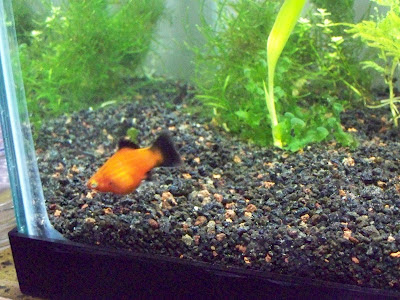 As you can see, this female is rather pregnant, and near as I can figure out, may or may not be close to spawning. Unfortunately there isn't a real clear way to figure out exactly when a fish is going to pop. All the websites say "You'll know your female is close to spawning when she is very fat. Like, really very fat." Thank you, helpful online fish websites.

The babies I have now were born in a smaller tank, before I got the big tank up and running, so when I made the move, I left them in the smaller tank for a while. They had a chance to grow a bit without worrying about being eaten, which the next batch probably won't, but hopefully the lovely plants given to me by a very generous father of a friend will provide enough cover for the new babies to hide out and stay away from the adults.

At any rate, now you've seen my latest breeding project. Feel free to call me a dork, since I'm pretty sure I qualify, given how avidly I've been watching this tank for any changes (including trying to catalog the number and variety of snails, or more likely eggs, that hitched a ride on the plants, which is sort of awesome as they're good for the plants and keep the tank clean.)
Posted by FarmGirl at 11:07 AM 6 comments: Links to this post