So, today we practiced for our test tomorrow. We did a pleasure pattern, and Marilyn was sure to tell us that if the horse acted up, that was ok, she was looking at how we did as riders in asking the horse to do what we wanted, and making him do it if he didn't want to.

It was interesting. Part of the pattern was to lope in two circles, one in either direction. Now, I haven't done a lot of loping in circles with Monkey. He's still maintaining the battle to go back to the barn, or the herd, at the trot, so we haven't worked much at the lope.

Did I mention that today was also our first day with spurs? Since Monkey has decided to ignore my leg pressure and heel pressure on things like sidepassing and 180 degree turns, I went out and bought a pair of these: 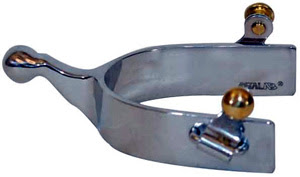 Notice, if you will, that rather than a rowel, they have a ball. That's because I want him to respond to the dull pressure, not the poking. That way, when he's further along in his training, I can lose the spurs and still get the response.

Unfortunately, Monkey Horse didn't understand that there is virtually no way I can actually hurt him with these spurs. (No, really. Before I ever left the house with them, I sat in my chair and kicked myself in my own thighs and calves with them. I kicked the crap out of myself, and it didn't hurt except at the hardest, and I was really kicking.) He felt the metal, the first time I touched him with them, and I thought we were gonna have a rodeo. That long leggy sucker hunkered down like a freakin cat ready to jump either way, kind of skittered to one side, and then tried to take off running.

He eased up on it though, and good thing, or I never would have been able to get through the pattern.

He also sidepassed both ways today, which is an improvement, since he's been choosing a direction and only going that way before now.

Tomorrow, I'll go early and saddle up, and ride him in the big round pen, so that we can work that lope and burn off a lot of energy before the test.

Marilyn recommended another bit change, she says he's hauling on my arms, I say he's helping me develop fantastic biceps. Hey, it's still a major improvement over what he was doing. Maybe the new bit will make him that much better.

This one is out of the school's bit library, so I'll be putting it on my headstall, and giving back the headstall and bit loaned to me by one of the other students. Get that done tonight, and we'll see how he does tomorrow.

I still feel really good about how well he's doing, but I'm reminded every day how much I want to get him going on neck reining good. I neglected it for a while until I had to ride him one day with only one rein tied across, and was forced to ride one handed unless I was turning him.

I was reminded in a very obvious way that I learned to ride with one hand, neck reining, and riding with two hands is a very new thing to me. Once I dropped my left arm back by my thigh like I'm used to riding it, the ride smoothed out, I didn't have to work at it, and my body fell back into the rhythms that were established for it in my earliest years. A lot less work on me, so we've been doing more work on neck reining as a break between the newer things.

He grasps the concept, he's just not very good at following it if it's not the direction he wants to go, which is something that we're still working on.
Posted by FarmGirl at 6:14 PM 13 comments:

Learn Something New Every Day...

Yesterday I whined over on ADs blog that I never got the nifty search results on my site meter. So, Babs explained why, I fixed the Java on my sitemeter, and now I get to see the referring URLs.

I kinda wish I didn't know this one, though....