So, we got the little show over with, Monkey placed third (he was the most immature looking out of all of them, and he behaved well, so I was fine with it) and Farmdad got some pictures for me.

To illustrate the difference in muscle tone, I give you: 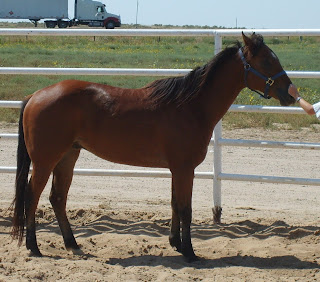 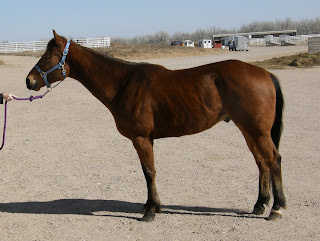 Look at how much muscle he's put on in his shoulders and chest! Now I just gotta build up his hind end, which comes after I make him slow trot for about twenty minutes so that he gets frustrated and when I finally let him stretch out really drives from the hind.

He's come a long way... the main problem we had today was he spooked a little at the people "helping" us trot, and he kept trying to eat my sleeves when we were standing set up. He did square up for me really nicely (as you can see in the photo) and for the amount of people that were wandering around and the distractions he behaved himself remarkably well. I'm proud of him, even though he got bored and tried to shove me over or eat me while we were supposed to be standing. I got lots of horsey kisses giving him my hand to try to get him to stand still.

Meanwhile, we still have riding class this afternoon, and he's covered in show-sheen. If I'm not careful, my saddle is going to slide off him like snot. But he's so pretty!
Posted by FarmGirl at 1:01 PM 6 comments: Links to this post