Went to the farm yesterday and did some tree climbing to get cuttings. I was going to do some pruning as well, but the wind was a little higher than I would have liked for that, so I left it for another day.

Here in FarmFamVille, the trees are at that early spring stage where they're ready to jump on it the moment the nights warm up enough long enough to get some leaves out. It's as if all of the buds are at a starting gate, going "All right, it's coming. I can feel it, it's coming. Get ready! Get ready! Wait for it.... waiiiiit for iiiit...."

We're still getting cool enough at night often enough that the buds are holding out for a little better weather, outside.

Inside, on the cuttings, is a different story. Bring em in out of the weather (because there's nowhere outside that I can put them that they won't get windblown all to hell... facts of life here are just that if I want cuttings I'm going to have to get em started inside) and give em good water and the buds swell and green like crazy.

I have some from last week, from the lone surviving mulberry at the farmhouse, that the buds look like they're gonna hatch little pod people soon. This is a good sign, I'm cautiously optimistic. Yesterday I hit the trees at the old ranch house, by the range pasture. There once was a whole enclosure of trees, though many of them have died over the years. Lack of care, lack of water, they were just old, really it's all of the above. I'm working on getting the surviving trees back into shape, but it's a slow process since I'm new to all of this and I'm just one person. I mostly worked on the trees near the Farmhouse last year, this year it's the ranch trees' turn.

No one lives there, and the house is in bad enough shape that no one is going to live there, but I still want to do what I can. For one, trees are rare enough on the plains that I want to do what I can to preserve the ones we have. For another, those mulberry trees make a decent additional food source for some of our wildlife, and since I'm pro wildlife, I'm all for that.

But a big chunk of it is just heritage. If I'm lucky I'll be able to trim these up and get em healthier, and they'll last several more years. But we've lost enough trees around the Farmhouse especially that it looks... bald. Since that's not how it is in my memory, I want to get some more trees back in, and mom wants fruiting trees. For a small investment in materials and a large investment of time I can hopefully get saplings started from cuttings. More time on my side but less money, and I'm enjoying the time I'm spending on it.

Plus, if I'm extra-successful with the cuttings, not only do I get to start rebuilding the picture in my head of the Farmhouse some, but I can turn any extras to good use. Either as bonsai (come on, tiny fruiting tree? That's just cool...) or as trade goods/repayment to folks who have helped me out in this ongoing project. Like the wonderful mother of a friend who sent me a bunch of her leftover gallon size nursery pots from the stuff she's done in her garden over the years. And then donated currant bushes from her garden when she learned that I was trying to figure out how to get some for Farmmom.

I've also got several cuttings from what I like to call the Miracle Pear Tree. In certain areas, you hear lots of stories about how Great Grandpa Willy tossed a peach pit, or a pear seed, or a plum pit from his midmorning snack and bam! There grew a tree!

It does happen here, though not as often. We've got a couple of those types of trees, one is far less surprising, being located right up against the side of the shop. Sheltered from the wind, watered with the runoff from the roof of whatever moisture we do get, it's pretty believable. The other.... is not in a place you would expect such a thing to happen. Not here, anyway.

It's out in the middle of an open patch over at the old ranch house. It's got some shelter from all the other trees, but it's not like the other one. This area has been opened up to the pasture and grazed off and on over the years, too. So this tree sort of survived against the odds, to start with. And then it produced fruit. Farmdad can remember one of his horses that loved the pears from that tree. He says that this gelding, who was built a lot like Monkey in the long and leggy pattern, would rear up to reach the fruit on the higher branches to snack on. It's still hanging in there, though I don't think it produced any fruit last year, not enough water. I've got cuttings from it from this spring as well, with fingers crossed that they do well.

Ok, enough babbling, have some pictures with (brief) explanations. 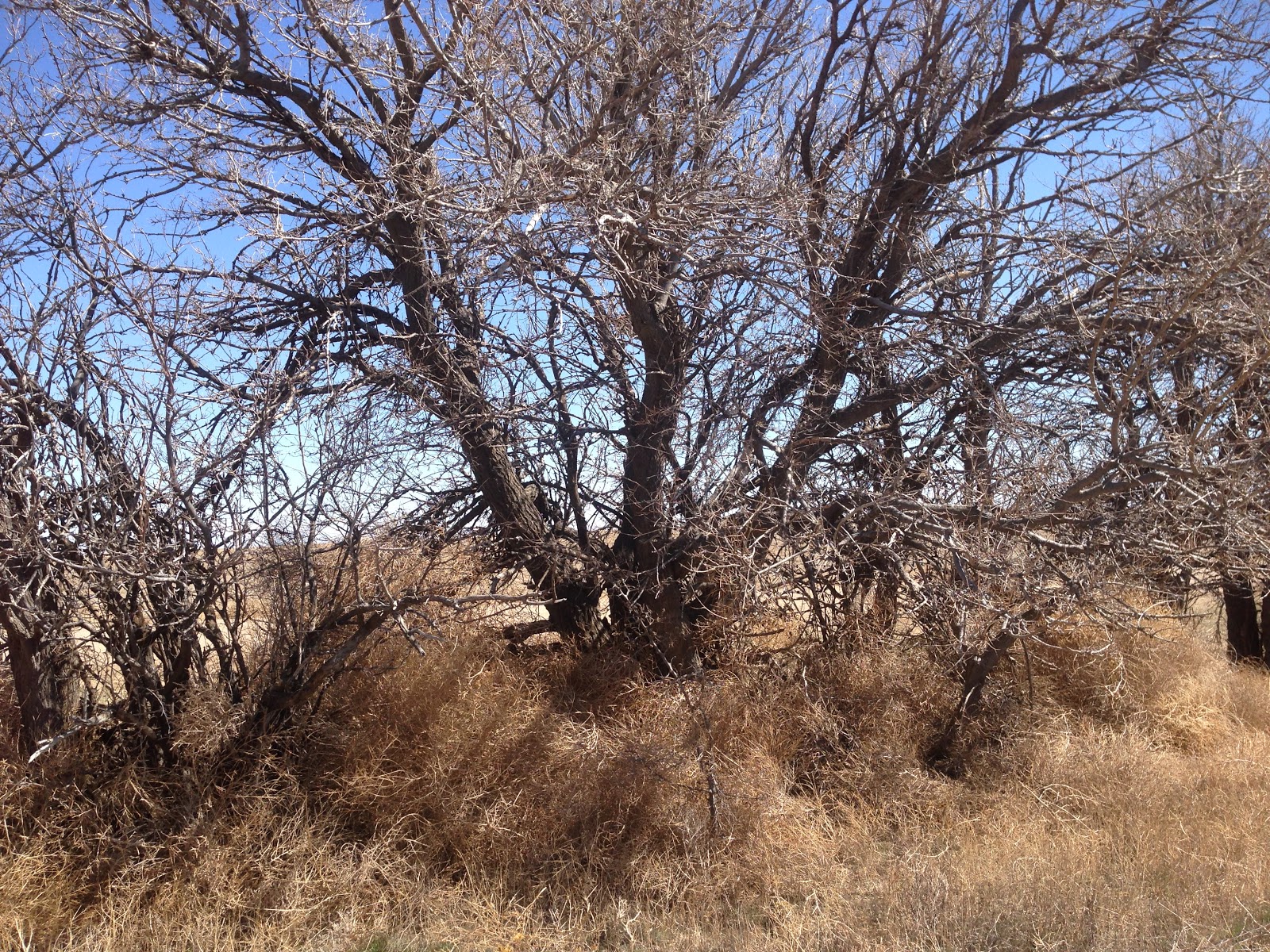 That's one of the mulberry trees at the old ranch house. Don't throw things at me, I didn't have a fork with me to clear out the tumbleweeds. It'll get done, it just didn't yesterday. 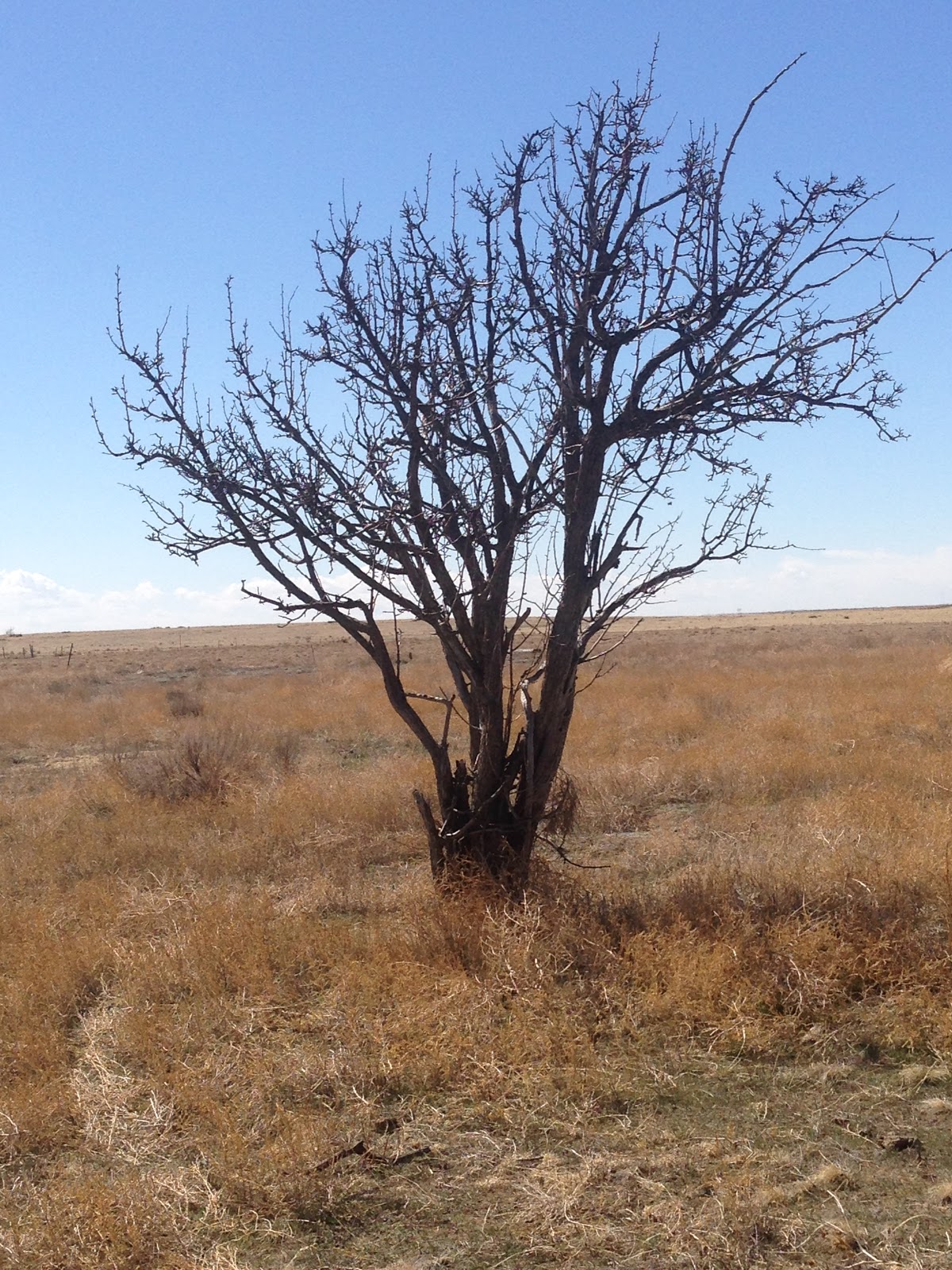 The Miracle Pear. As you can see it sort of stands off by itself. Like I said, it's got some shelter, the three sides not pictured here have trees in a sort of three-sided box, but they're 50 yards away or more, and most of them are dead. 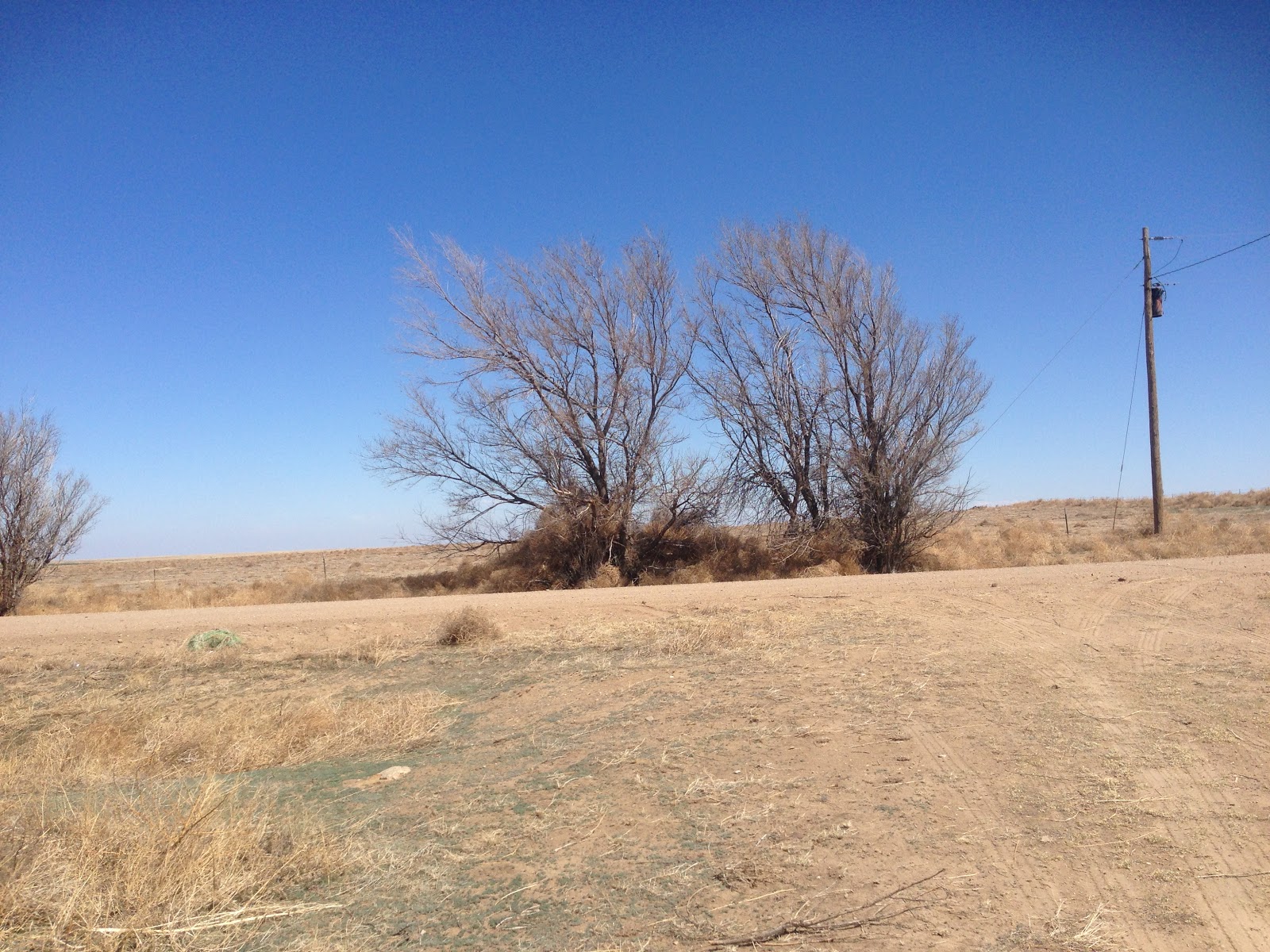 This is sort of an illustration of one reason I find bonsai such a challenge. I haven't really gotten into styling yet, but I've been reading a lot on the subject, and most of the bonsai artists that I really like their work seem to say the same thing: Look at the trees in your area, and make your bonsai look like them. Well, sure, you want that natural look, but honestly around here most of the trees either look scraggly, or have the wind-blown lean to the north. Or both. 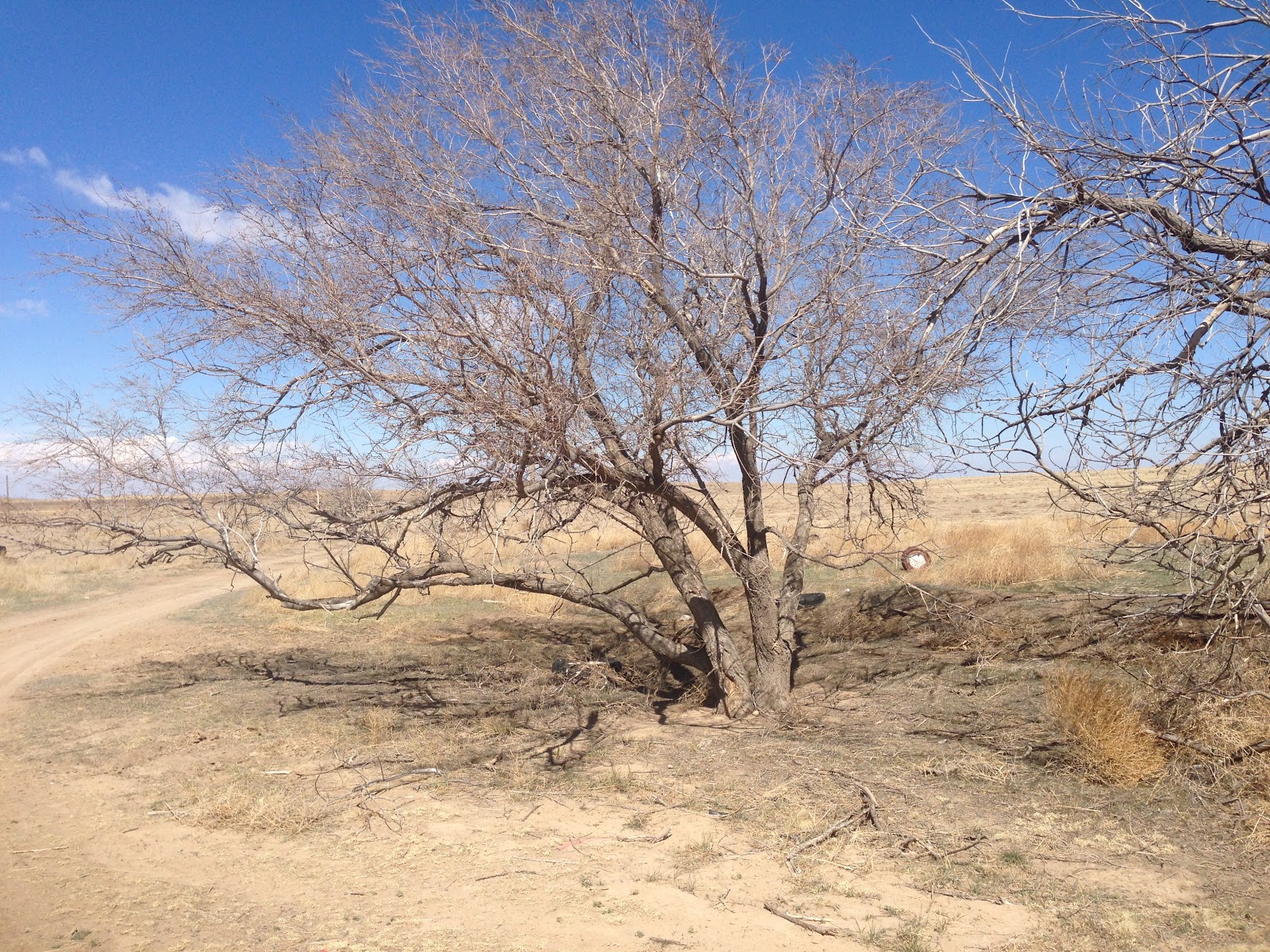 Which is not to say that we don't have trees that I think are beautiful This one at another location is one of them. Yeah it could definitely use some cleaning up, but I like the way it looks. Oh, and all of these are living trees, I promise. They just haven't started leafing out yet. They're all in that "wait for it" stage of spring. 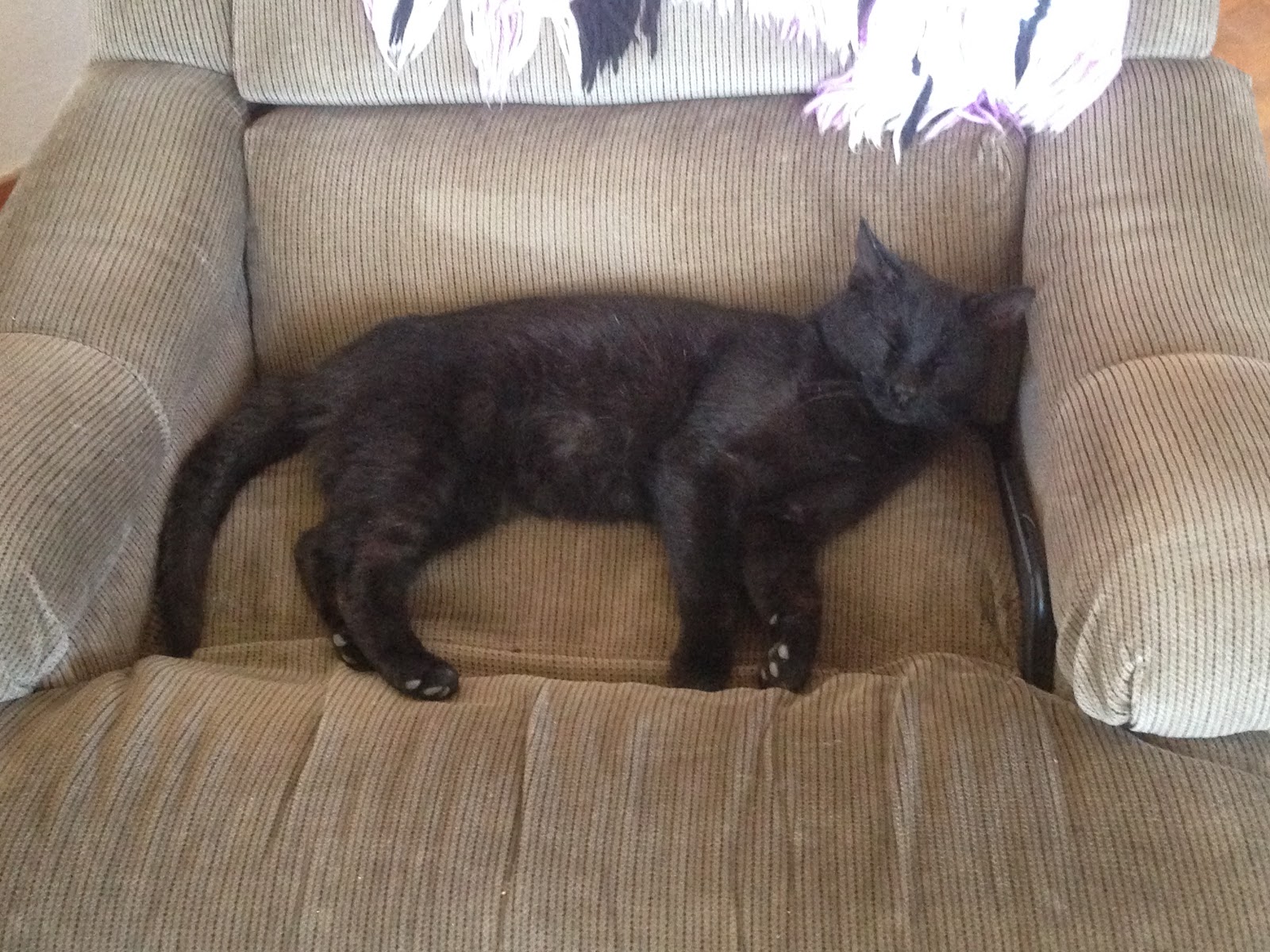 And last, but certainly not least, the ever helpful Thomas Cat. I never would have expected him to get as big as he has from the teeny kitten that he was, and he's retained all of the snuggliness and love that he had as a kitten.
Posted by FarmGirl at 11:41 AM 5 comments: Links to this post