In honor of my weekend off, I thought I'd work up and post a couple of the pictures that I got of Bubbah.

I thought about making them black and white but when I looked at them that way, they just didn't look right without his gorgeous color. 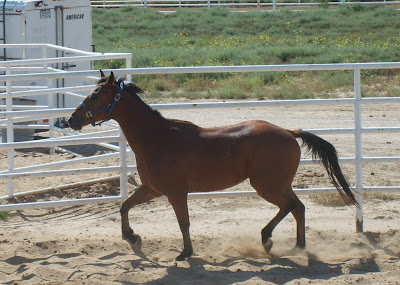 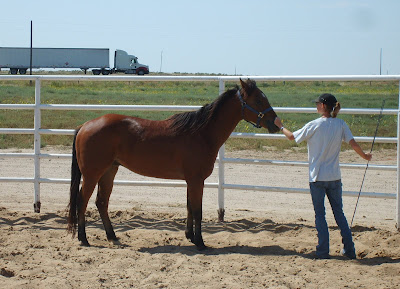 Posted by FarmGirl at 7:13 PM 7 comments: Links to this post

I'm in the process of trying to bribe kids from the college to come help with the moving of the cows tomorrow.

We tried today... our help didn't show up. The portable corrals that we borrowed from the conservation service are in a bad way. Things just didn't work.

So, on the theory that more hands are better, I'm attempting to bribe people to come help us tomorrow after class.

For two of them the bribe is "Want an adventure?"

I'm waiting on a call back from them.

For E... I'm using the rabbit in the freezer, as well as possibly the venison roast, and videotaping his rodeo practices. Along with the damsel in distress routine.

I'm waiting on a call back from him, too. His message was "E, it's Farmgirl. I need help, and not just the crazy chick psychological kind... "

Crossed fingers, I really don't want to repeat today tomorrow.
Posted by FarmGirl at 5:04 PM 1 comment: Links to this post

How Did They Survive?

"I brought my camera so you can pull off the pictures of the bull riding, and I got a few of Bubbah, too."

I pulled the card out of my camera and handed it to Farmmom, who petted it like Gollum and started muttering "my precious."

"Well crap, looks like I left mine at home."

"You left it at home??? Why would you do that? You know I wanted to see these!"

"Well I had it set aside to pack with my laptop but I must have missed grabbing it."

She gave me that disappointed, my child is a moron look.

"I have a mini USB cord, we'll just hook the camera up."

"There isn't a mini USB plug on my camera, its a specialized cord, which is sitting in the box for the camera at my apartment."

"Oh. Well we'll put the card in my camera, which does have a mini USB plug, and pull them off that way." She eyed me sideways like it was my fault that Samsung is anti-mini USB.

"If that'll work, if I remember right that camera has issues with that. Remember I had that one first."

"It'll work!" Farmmom's voice had taken on the same tone I remembered from my childhood when I wanted brand name sneakers and she wouldn't let me get them. Memories of a terrified shoe store clerk who had tried to cajole her into the more expensive shoes for the commission floated through my head and I shut up.

"Well you have a card reader, don't you? We had one that had a cord on it."

Twenty minutes of searching later, I've turned up no card reader, and Farmmom is looking dejected.

"I think she took it to Oklahoma with her."

No card reader at Mamaw's.

To heck with this, Farmmom and Farmdad take pictures with digital cameras too, they need their own card reader.

After a suitably long search in the minuscule computer accessories department I've spotted four different kinds of cards, six different kinds of travel mice, two different keyboards, and a set of metric crescent wrenches, but no SD card reader. Finally, my eye catches something that looks like a USB hub, but on closer inspection turns out to be a reader for every kind of memory card in existence. Thats gonna be higher than I really wanted to pay, I can tell. Even though the price sticker on the hangar has been removed.

Get to the checkout and the clerk rings it up, exclaiming over what a nice reader it is, she's got forty seven different readers and she doesn't have that one, blah blah blah, great, lady, come on, if I don't get back soon I'll have to use the card reader as a shield when I walk through the door.

Ten forty something. Not as bad as I expected, pretty danged good, actually.

When I got back to the house I entered the door and immediately bowed to Farmmom, holding the card reader above my head in an offering pose, and she whipped out her razor knife, leaving me wondering if she was planning to give a blood sacrifice (me) to the technology gods to give thanks for the bounty of digital pictures, but she held it out to me to open the plastic packaging.

I breathed a sigh of relief and quickly stripped the packaging from the reader, plugging the card into it before I offer it to her again.

"I'm your only daughter, mom."

"As much of a disappointment as you are to me today, can you blame me for not having another one? Leaving the card reader at home..." she sniffed and trailed off into a mutter as the pictures copied from the card to her computer.

Looks like I get to live for another day....

*Alco is a cheesy little chain department store. Used to be Duckwall's, but then they got rid of the smell and had to change the name. Anyone who has been in a Duckwall's knows the smell I'm talking about. You could always tell when someone forgot your birthday and just hit Duckwall's to get something cheap and quick, because of the smell.
Posted by FarmGirl at 7:25 AM 8 comments: Links to this post