The Genes Will Out.... Brickscuit Edition

I grew up in a mixed family. I don't mean racially or even religiously, mind. No, the conflict was about biscuits.

See, Sugar had only one use for canned biscuits (she called 'em whop-biscuits for the sound the can made) and that was monkey bread, because it didn't matter what kind of dough you used.

She was adamant, biscuits should be homemade.

The problem was, Farmmom couldn't make biscuits. She was perfectly willing to learn to make biscuits it just never seemed to work. Sugar handed over her awesome biscuit mix (recipe here, seriously try it) over and over again but they just never came out right.

And by not coming out right I mean we used them for batting practice, and to play fetch with the dogs..

"You're kneading them too long, you want to knead them just long enough to get the dough to hold together." Sugar told Farmmom. Farmmom tried again, and again they came out hard. So Sugar, convinced that short of baker error her biscuits were no-fail, made up a batch and counted strokes with the spoon, as well as how many strokes to knead the dough, and wrote the recipe out for Farmmom that way.

And they still came out hard as rocks.

The next time Farmmom tried, Sugar was standing over her shoulder confirming that she was doing everything right, walking her through it step by step. They slid the biscuits into the oven and Sugar was sort of smug and triumphant, because she knew they'd come out this time.

Except they didn't. Brickscuits again.

Sugar finally gave up on teaching mom to make biscuits, and we became a whop-biscuit household.

By the time I was big enough to make biscuits Sugar had pretty well stopped. Her arthritis made it hurt to knead the dough. Not that she used whop-biscuits, mind, she just didn't have biscuits at home anymore. So I had never tried to make biscuits until the other night.

See, Farmmom and I had been putting together some holiday goody boxes for our renters, and we were including some cactus jelly, so I thought some biscuit mix would be a nice addition, and whipped some up. Had some extra, so I figured I'd give it a shot, and finally find out whether mom's Brickscuit genes won or not. 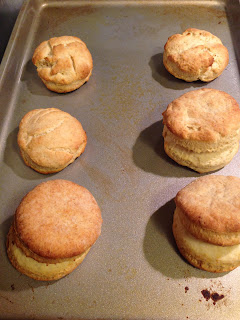 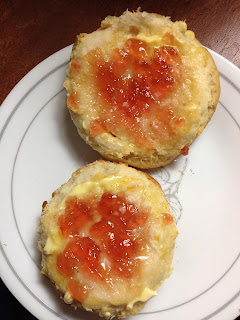 The verdict is that Sugar's genes beat out Farmmom's, and I'm now on biscuit duty.

(For the record, the difference in the biscuits pictured is actually two different ways to do em. The big ones are made according to sugar's instructions, buttering half the dough and folding the dough over creating a two layered biscuit. The smaller ones are single layer, which is how most people do biscuits. In the future I'll roll the dough out a little thinner for the two layer version. Nothing wrong with em, they're just big honkin biscuits that way.)

Posted by FarmGirl at 10:59 AM 4 comments: Links to this post

It's been cold.... and I mean COLD for the last week.  Yesterday I made a pot of Poppa Dicks green chili. This recipe works well with any meat from pork to venison.  I used some venison that our renters gave us. Farmdad was bragging and someone asked for the recipe so here we go.

Brown the meat, celery and onion in stock pot.  Don't cook it done just brown it a bit.  Then add the tomatoes, green chilies, jalapenos and spices.  Add water to cover everything.  Bring to a boil.  Turn heat sown to just a simmer and let it cook for several hours.  The longer it cooks the better it is.  Add water as needed.