Duct Tape and The Force

You know how they say Duct Tape is like the Force? No? Ok I'll tell you.

"How is duct tape like the force?" (not everyone elevates Duct Tape to the level that we hicks and rednecks do, as far as we're concerned if we've got a roll of duct tape and some smooth wire we can build the space shuttle out of our front yard. It'll have a Dodge logo on the nose...)

"It has a light side, a dark side, and it holds the universe together."

Unfortunately that saying doesn't take into account smartass friends running errands for you.

See, I'm packing up the house, and I needed some tape to reconstruct boxes. I'm also lazy, so I texted SB and asked him to swing by El Marto Del Wal, and get me some duct tape and a sharpie, cause mine got jacked by the old roommate when she moved out. Both the duct tape, and the sharpie.

Must. Label. Boxes. Especially considering that they'll be in storage for a while. I even labeled the packing material on all of my knick knacks.

So anyway, SB runs to Wal Mart for me last night, and comes back and tells me to close my eyes.

Are you suspicious yet? I was.

He hands me a package of two chisel tip sharpies. Cool.

Then he hands me the tape.... And now, I can't even say "Silence is golden, but Duct Tape is silver."

No, I can't. Because that little shit brought me neon flamingo pink Duck brand tape. 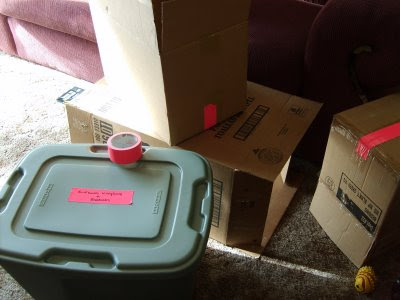 It's a crime against humanity. But I'm too lazy to take it back, so I'm using it.

"Didn't they at least have purple??"

"Well, maybe. But that wouldn't have been nearly as entertaining for me."