I've had a couple of discussions, and gotten a couple of questions, about the functionality and purpose of saddle design. Personally I find it an interesting subject, if only because the saddle is the bit that helps keep me firmly on the horse's back.

So. First, let's take a moment to look at the purpose of a saddle of any persuasion:

To distribute a rider's weight evenly and widely across the horse's back, for the comfort and increased efficiency of the horse as a mode of transport.

That's it. The comfort of the rider is completely secondary to making sure that a horse, a rather expensive, but highly useful animal, operates at peak efficiency and comfort while being ridden. Some particular designs are better at this than others, but that is the reason saddles were invented in the first place.

Maybe the first fur strapped onto a horse's back when mankind decided they were useful for labor as well as food was only intended to keep the rider's sensitive bits from rubbing raw on the spine, but today's saddles were thought up to help increase the efficiency of horses as a mode of transport and labor.

I can hear you clamoring, but just hang on a minute. I am not in any way endorsing the newfangled so-called "treeless saddles." For one thing, I simply don't know enough about them to either endorse or decry them. For another, I haven't even had a chance to fondle one, let alone ride one, and until I do, my position will remain: "Hmm. Interesting. But I know this one..."

Now, on to the pictures. We'll start with a basic western saddle tree. I would give you a picture of an English saddle tree as well but they seem to be durned hard to find on the intarwebz, a condition also known as "not on the first two pages of a Google Image search." 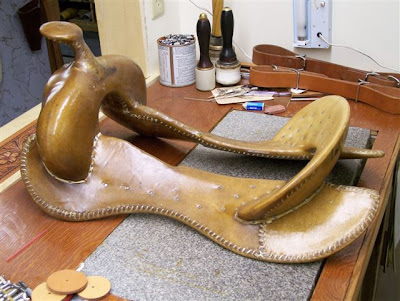 This, my friends is a western saddle tree. At the front is the swells, which, in terms of the rock bottom purpose of a saddle, performs the service of holding the bars together in a manner that leaves room for the horse's withers, thus allowing more free movement at the shoulder. Those pieces that form the sides of the tree are the bars, the major weight-distributing panels of the saddle, which spread the load of the saddle over generous square inchage, making it easier to carry. At the back is the cantle, which serves the purpose of holding the bars together at the rear and further assisting in the weight distribution theme.

The horn, and the height of the cantle, have no purpose. Well, I suppose the height of the cantle could be a further method of distributing weight, but I'm not an engineer so I'm not sure how the math works on that. However, cantle height is generally considered to be a rider comfort thing, and the horn, while necessary to certain working conditions and jobs required of the saddle, is an example of specialization.

Now, lets move on to the bits designed to make things better for the rider. There are two major schools of riding in the US, Western and English, which both have their supporters and detractors.

Since I know Western a hell of a lot better than English, that's what I'll focus on. I'm sure someone, somewhere, has gotten into this discussion on the English side, if you're interested. 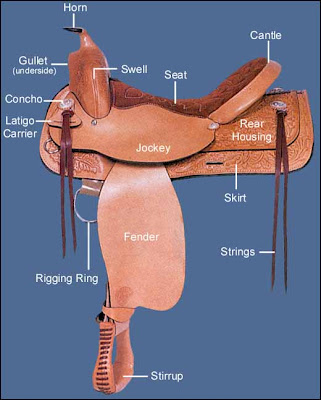 So. The western saddle. I'm not going to describe every part of it here, because this post is proving long enough as is, but I'll cover the salient points.

A western saddle is designed for long hours, security, and a fair amount of comfort, because the purpose of the saddle demanded such things. Originally, western saddles were designed with the working cowboy in mind, built for days on the range, and the kind of work that the horse and rider needed to do.

The horn... roping a bovine is no fun if you don't have anything to give you leverage, both to keep your butt in the saddle (because believe me, that animal on the end of the rope is a lot stronger than your thigh muscles trying to keep you where you're at) and to utilize your mount's greater strength to hold or drag said bovine. Secondary uses include a handle, a place to hang your reins, and a handy dandy bruise creater in the event of a poorly executed unauthorized dismount.

The swells, as I said before, primarily help to distribute the weight, but cowboys discovered another benefit and altered the design somewhat... it's not shown real well here, but larger swells that come out with a bit of a void underneath provide an excellent leverage point for keeping butt in saddle when things go, quite literally, rodeo.

The seat, as I mentioned, is designed for comfort, the high (relative to an English saddle, though some models do have extremely high backs) cantle also provides a leverage point for keeping butt in saddle during the often violent motions of a horse working a cow. In the English discipline, as I understand it, a gallop or hand gallop is ridden, at least, in two point, with the knees providing the main stabilization points and the butt being emphatically out of the saddle, which is, I am told, very tiring. Cowboys chose another way to go about riding the odd motions of a horse's gaits, creating a "pocket" in the seat to assist in the endeavor of keeping horse and rider together, with minimal effort.

Well, would you want to spend all day riding rough terrain on your toes and knees? Didn't think so.

In the picture above, the bits of leather lacing hanging from front and rear of the saddle are labeled as strings, which is accurate. Just as accurate would be latigos, or tie downs, or pack strings. These are there for attaching things to the saddle for ease of carrying. Secondarily, in today's modern world, they provide an excuse for putting a concho on the saddle and adding more flash.

Large saddle skirts are, as far as I know, extremely limited to the Western style, and they originally had but one purpose: To provide as much coverage as possible to protect the horse from branches, twigs, cactus and mesquite. Of course they're decorative as well with the designs and stamping on the leather, but really, they're a layer of armor between the horse and the world.

The wide fenders serve the same purpose, to help protect the horse from scratches and pokes, while maintaining leg mobility for the rider to cue his mount.

A Western saddle became a matter of identity, as well, for the cowboys who depended on them to make their living. Stamping of patterns into the leather of the skirts increased the strength of the leather, by compressing the fibers together, and made them less likely to get torn up if they did happen to get snagged on something. With the advent of this practical reason to add decoration to one's saddle, when every one was made by hand, each saddle became a work of art and a display for both the skill of the hand that crafted it, and the personality of the cowboy who rode it. Which only makes sense when you consider that a cowboy's saddle was occasionally his only home, his job, and his one true love.

There are a lot of people who proclaim Cavalry saddles in their various iterations to be the most efficient saddle in the world, per the real purpose of a saddle. And guess what? Most Cavalry saddles bear a striking resemblance to a Western saddle tree covered in leather, padded underneath, and bestrewn with attachment points for packs and supplies: 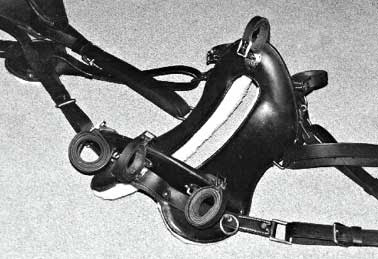 I guess we might just be on to something, huh?

Personally, I view the basic form of a saddle (meaning a tree to distribute weight with some form of assistance to the rider in his endeavor to remain on the horse's back and not in the dust) as one of the most elegant, and refined pieces of physical design in the modern world. Regardless of what your personal flavor is, every one of them serves the exact same purpose, in such an efficient and cost effective manner that the base designs have survived for centuries. Once the idea of bars, connected front and back in a manner that allows a certain amount of flexibility was come up with, everything since has been a refinement, or a specialization.

And, honestly, a Cavalry saddle, stripped of pack straps and rings, is, in my opinion, the epitome of the true purpose of a saddle.

That doesn't mean I'm riding one of those uncomfortable things, however. There's a reason the Cavalry always shows up at the last minute in movies, because they have to treat their saddle sores before they can get on the road!
Posted by FarmGirl at 11:37 AM

Excellent post! Good info and a good pic of an old Cavalry saddle; I wouldn't want to ride one of them any distance either... :-)

I first rode a horse with a McClellan saddle. That bloomin' slot in the middle is purposely designed to pinch certain parts of the body!

One correction, if I may. Two-point is actually on the thighs rather than the knees. The canter ("lope" in western) is ridden on the seat, and only the hand gallop is ridden in 2-point. You may notice that at a good gallop, you come out of the seat a bit in a western saddle, to stay over the horse's center of gravity... that's very similar to 2-point.

Thank you! I always like to be as accurate as possible, but like I've said a few times on this blog, I haven't been exposed to the English discipline.

I read once that Gen. McClellan designed the U.S. Cav. saddle off a Belgian Cav. saddle. He stripped off all the non-essential parts. Part of his purpose was that the men were encouraged to walk. That way, they were assured of having fresh horses when they got to the fight.

As a side note, I recall R. Lee Ermey talking about Cav. on "Mail Call". He said the average Cavalryman was only 140lbs and with the saddle and all the equipment attached to it, the horse had to carry 200lbs. Now, it seems the average man is 180-200lbs and riding a 30-40lb saddle, plus whatever extra gear. Go figure.