Or not. Went to move Pixel cat and the kittens to the bathroom to shampoo under the head of the bed... got the box set down in the bathroom, and before I could even stand back up, she had one of the kittens and was out of the box and under the bed. Once I took the box back into the bedroom, she was fine with me putting the kitten back in the box, and hopped right back in herself.

Spaz cat. So, I wiggled stuff around until I could get the shampooer in, with the bed right against the box and other stuff in the room, and Pixel glaring at me and half way panicky with the shampooer running near her babies... but she stayed in the box, so I guess it was a win win situation.

I've never seen a cat growl while it was carrying it's own kitten, but she gave me the clearest "go to hell" look ever as she stalked away with the kitten in her mouth, grumbling at me with every step.
Posted by FarmGirl at 1:32 PM 3 comments: Links to this post

Looks like we're maxed out at four kittens, technically three. The one was still born, but the other three are going like gangbusters.

Pixel-mommy accepted food and water, when I took it into the bedroom for her, so I think she's done. Of course, she's a cat, so I could be entirely wrong. I'm going to leave her in there during my Lit class, and if she hasn't had another kitten by the time I get home, I'll move the bed and start shampooing the carpets, after I move her and the fuzzballs into the bathroom. She hates the shampooer.

Meanwhile, one of the little furballs is already purring. I can't tell which one it is, but it sounds like someone is winding up one of those little toy cars really fast, it's adorable.

So, we're still at one light reddish gray with either stripes or spots, that one is going to be long haired so it's already kind of fluffy and hard to tell if it's going to resolve into spots or stripes... one dark gray with black stripes, and a white streak down it's nose.... and one solid gray that looks like it's going to be a miniature panther.

Pixel-mommy is happily nursing her children, purring her head off. Things are good.
Posted by FarmGirl at 9:50 AM No comments: Links to this post

We have kittens! And they're now in the box, in spite of Pixel's best efforts (and four time successful efforts) to have them under my bed. That's right, she had four of them under my bed. Damn cat. I think she's still in the process, she's still pretty chunky, so I'll bet she's got another one or two in there. So far we've got one fluffy reddish-gray kitten, and two that are dark dark gray with their momma's stripes, and one that's either black or another dark gray. I think that last one may be stillborn, it wasn't mewing when she was cleaning it up.

Moving the kittens from under the bed to the box was... interesting. I was walking to the bathroom and heard a tiny little mew, and looked under the bed, and there she was. Luckily, she was at the foot of the bed (she moved them, there are blood spots at the head of the bed.. Thank you Farmmom, for the shampooer....) When I flipped up the blanket that hangs over the foot of the bed, she growled at me, until I petted her. I'm not allowed to pay attention to the kittens until I tell her what a good momma she is. We've been through this before. Once I give her the proper praise and adoration, I can do anything I want to with the kittens, so I moved them to the box, and she followed.

Here's the current attractions, and their mom, who isn't entirely happy with the whole flash thing.... 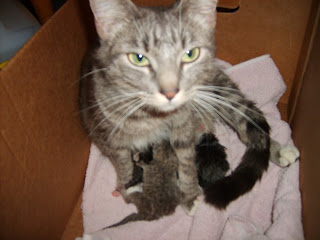 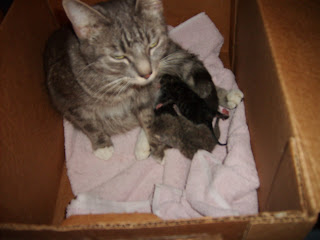 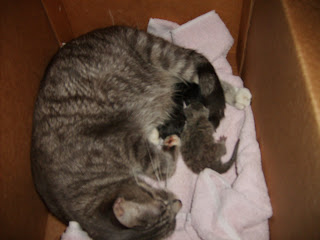 Posted by FarmGirl at 6:04 AM 5 comments: Links to this post