I know I've been noticeably absent lately, and I can't promise it won't happen again. Frankly, most of what I consider entertaining/interesting is happening at my job lately, which makes it hard to come up with something to post about.

So since someone (Cough OldNFO Cough) chewed on me about posting, I'll post the only other remotely interesting thing that's been happening, and what I'm most focused on this particular week: Chickens.

See, after going to the auction to pick up some more chickens for the farm, and them being higher priced than I wanted to pay for what was available, I made the decision that I would just raise more chickens myself. Maybe order in some fun ones from a hatchery. So, I started planning to incubate some of the eggs from the barnyard mix we already had, and went to pick up some accessories, only to see that the farm store had their fall chicks in that week, so I bought a bunch, brought 'em home, hurried to finish fixing the old wood granary that we were going to use for a chick house (which precipitated some drama that I may or may not write about at a later date... for now suffice to say that it's the most expensive "what we have on hand, don't spend money" repair project I've ever been responsible for starting...) and continued on my merry way.

Now, when I was picking out chicks in the pullet tank at the farm store, I was trying to bear in mind what had sold well at the auction, so we wound up with a bunch of little red chicks that turned into little red hens (and one cockerel.) Farmmom and I also picked out four or five that looked interesting, that we wanted to see what they would grow into. Bear in mind, the plans for these chicks from the start were three-tiered: First, build up our own flock with the ones we liked. Second, sell whatever we could of the rest of them. Third, eat whatever didn't sell.  So, we figured if the interesting looking chicks turned into interesting looking hens, they'd be sticking around, so we only got a few of those.

Here, have a break from the wall of text, and a picture of baby chickens: 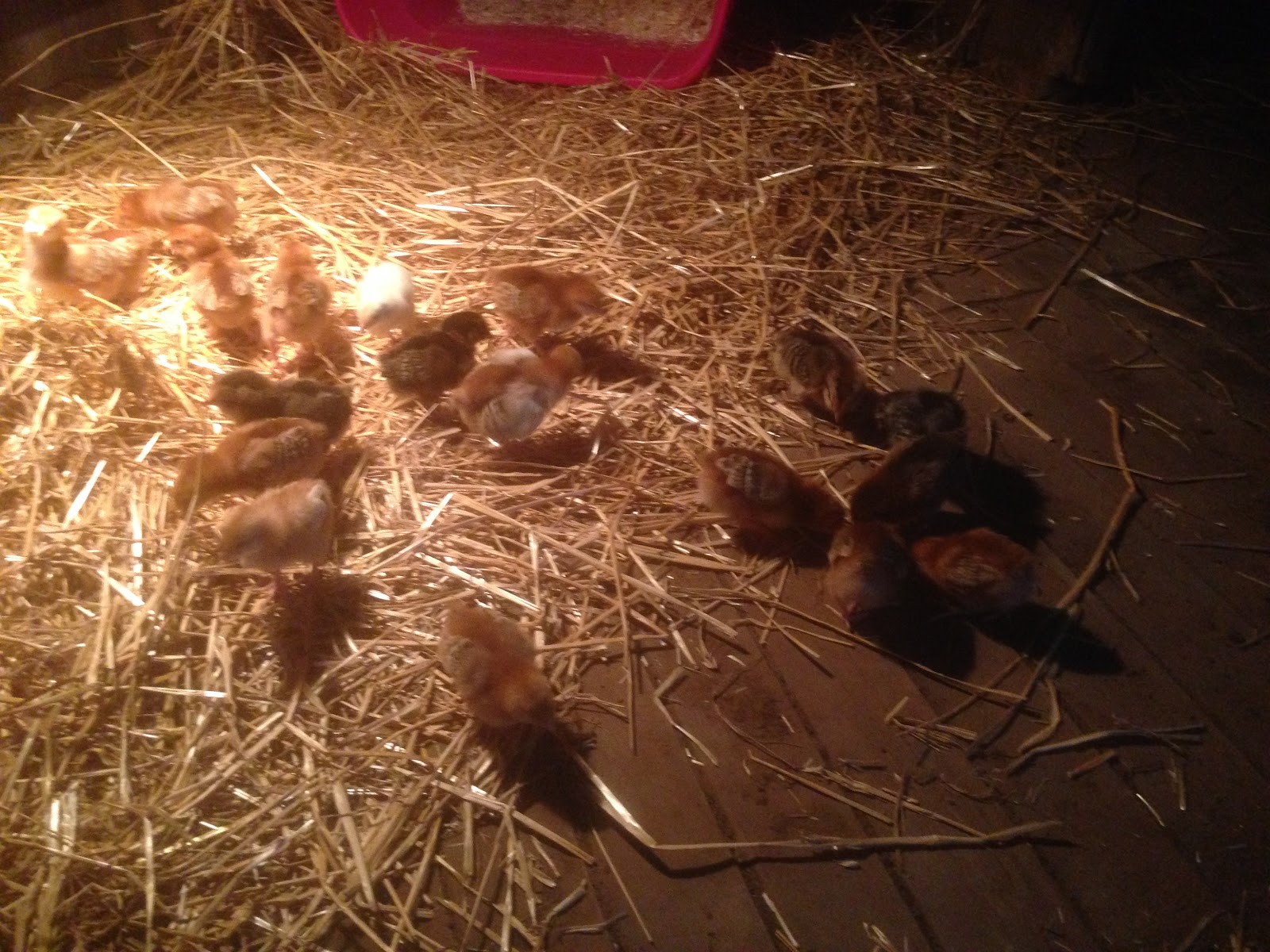 As chicks do, they grew, and I threw a baker's dozen plus one of the eggs from our hens in the incubator and set about eagerly waiting and chewing fingernails to see what we'd get. Meanwhile, the bought chicks grew:﻿ 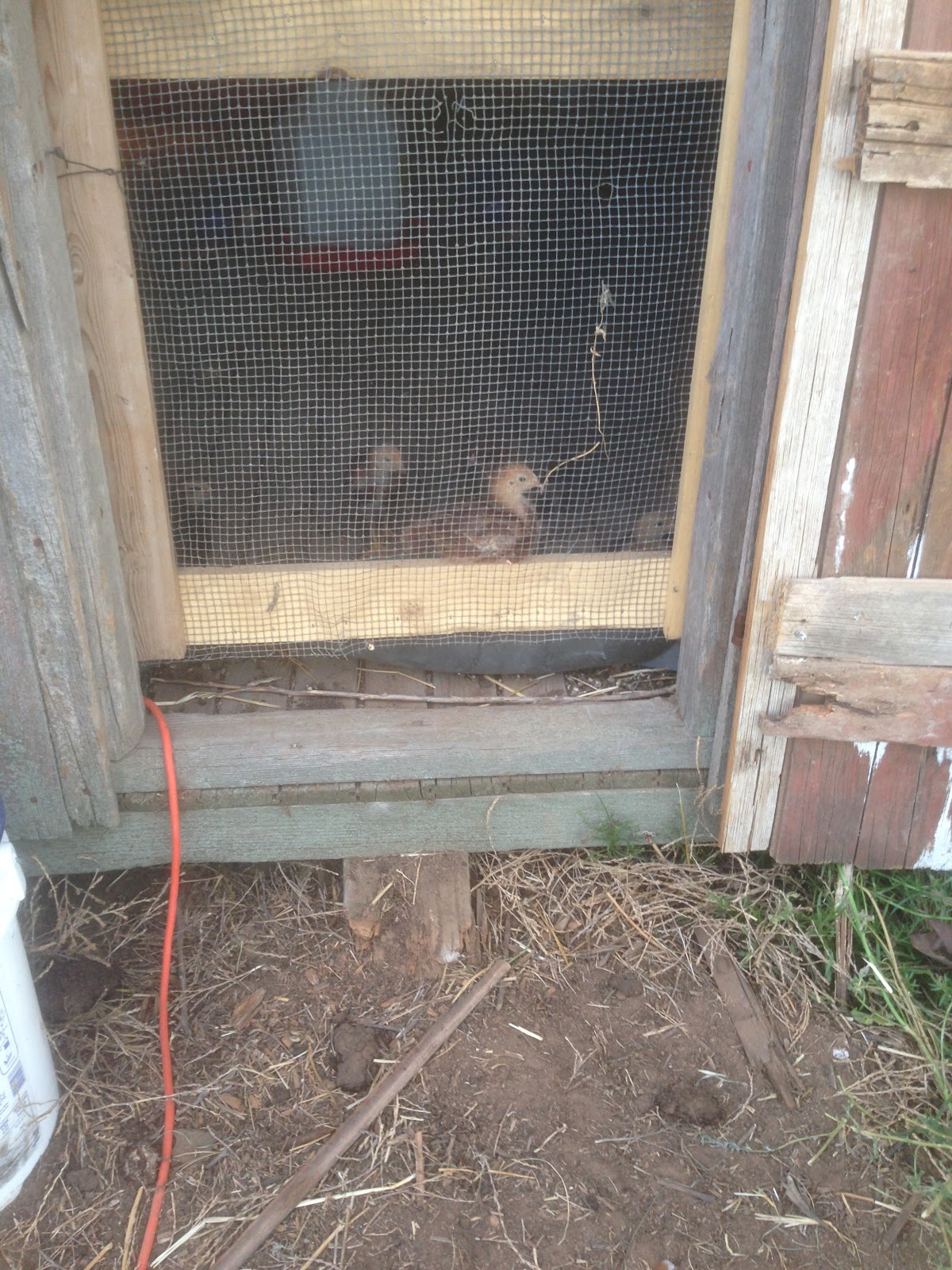 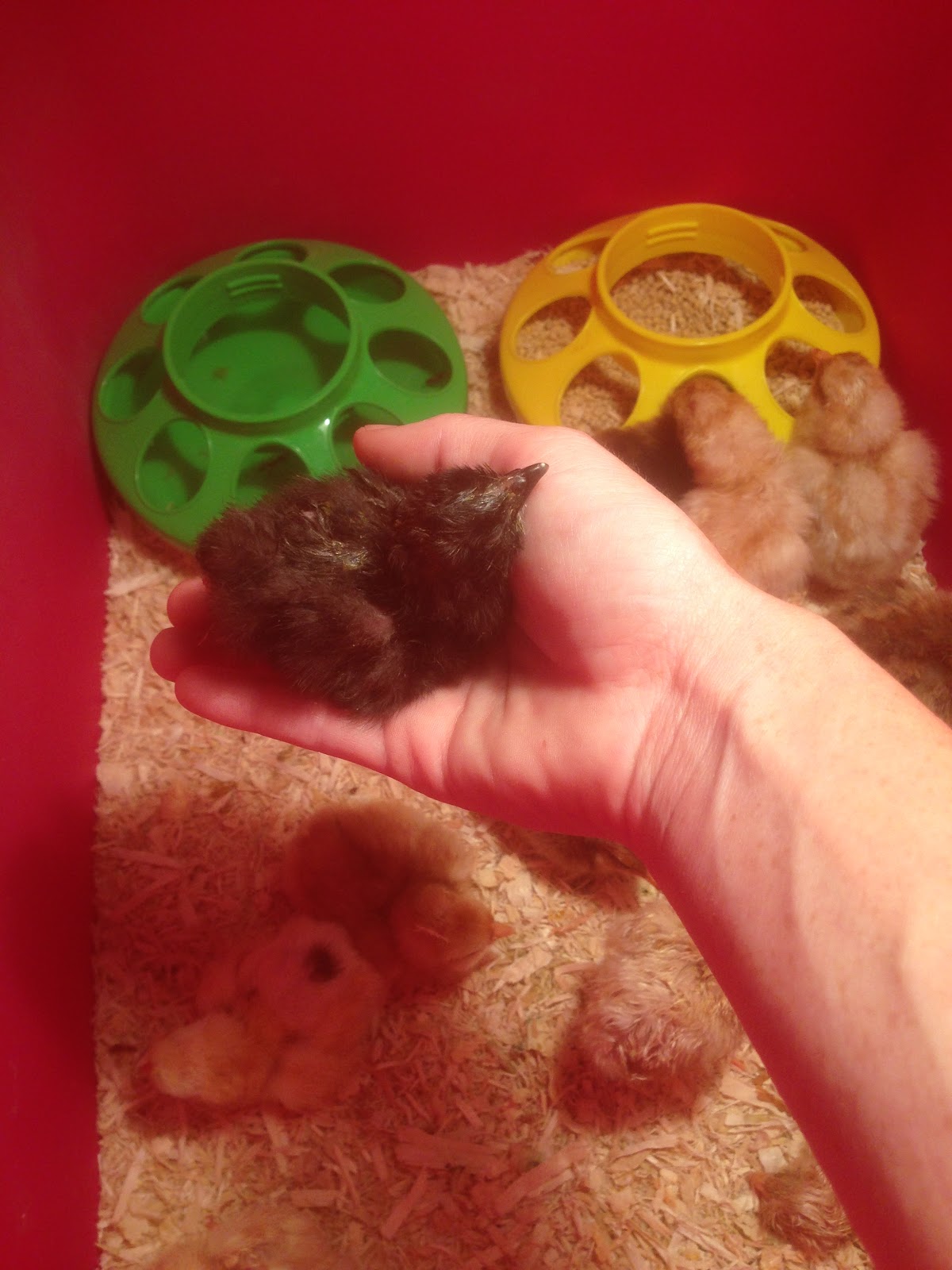 ﻿
A few interesting things about that picture... First of all, that little black chick in my hand is a lucky bugger. She wasn't positioned right in the egg, so she pipped (poked her beak out) through the membrane that is full of veins and does the oxygen exchange for the chick while it's in the shell, so she lost some blood, and wasn't in the right position to really get worked around to "unzip" her shell. She needed a little help and TLC. So, she and a couple of her siblings, one with some feather issues and one just because I ran out of room in the transport boxes, stayed inside in the super controlled environment brooder whilst the rest of them went to the chick house. 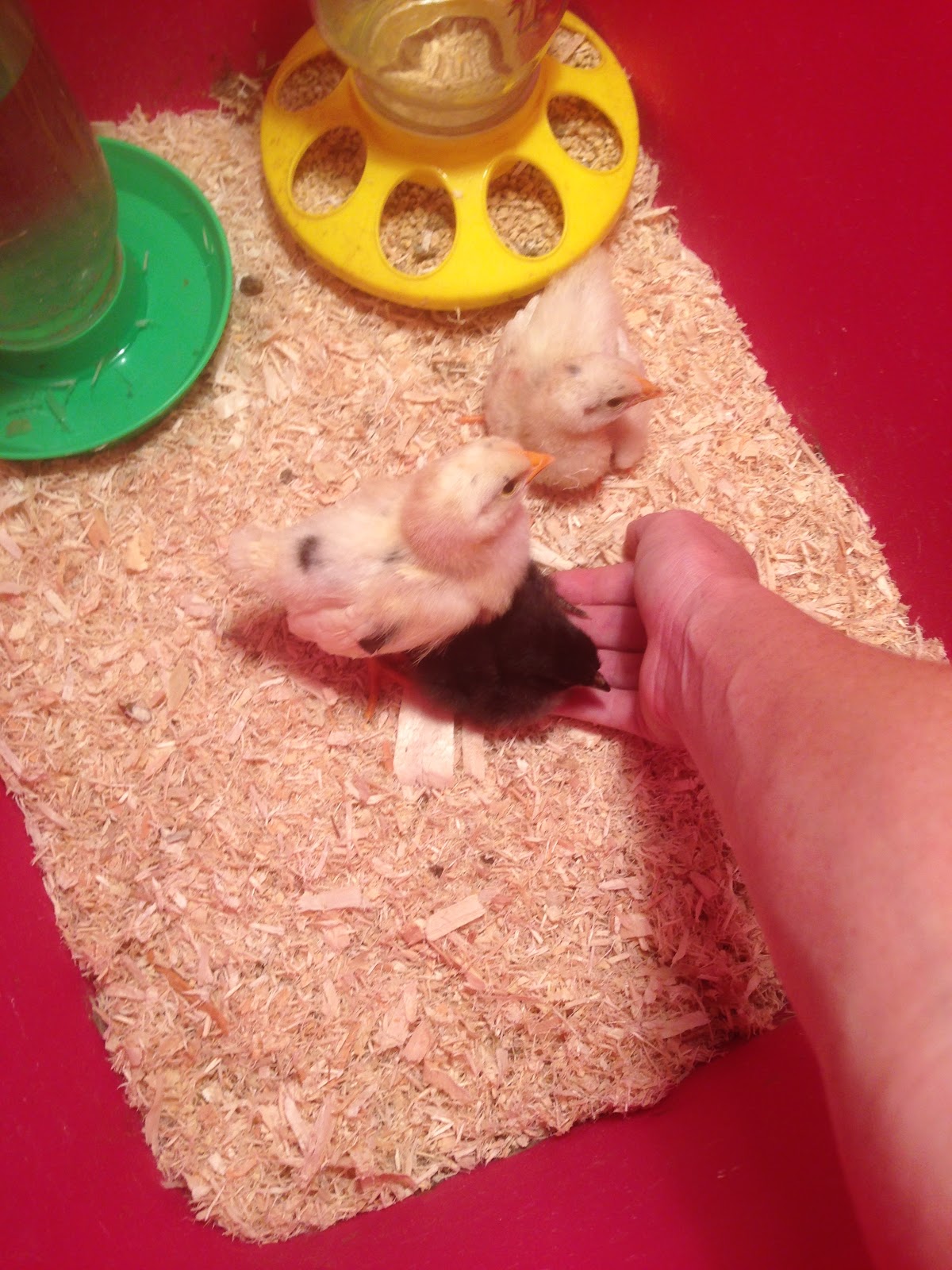 As you can see there she was a little behind her pair of siblings growth wise. She's pretty well made it up now, a little over a month later. Oh, the other interesting thing about those pictures... you can see in the shadow of my hand in the first one the little yellow chick with the black spot on it's butt. We got one more yellow chick out of the hatch too, the other one in﻿ the second picture. Now, at that time we had one white hen who laid white eggs. The rest were light red with white markings hens who laid brown eggs. So the only eggs we could positively identify as coming from a specific hen were the white ones. Our rooster is a Welsummer, which is a very colorful and attractive bird (but he's an asshole... it's ok though he whupped a boxer mix that we thought had killed Sonic, the white hen.... shut up she came named...) Anyway... one of those chicks came from the white hen, but it's not either of the ones you're thinking of. So she's our little oddball baby all over.
Speaking of odd I did mention earlier that we had grabbed some "interesting" looking chicks for the hell of it, but I gotta say I didn't expect what we got out of them. 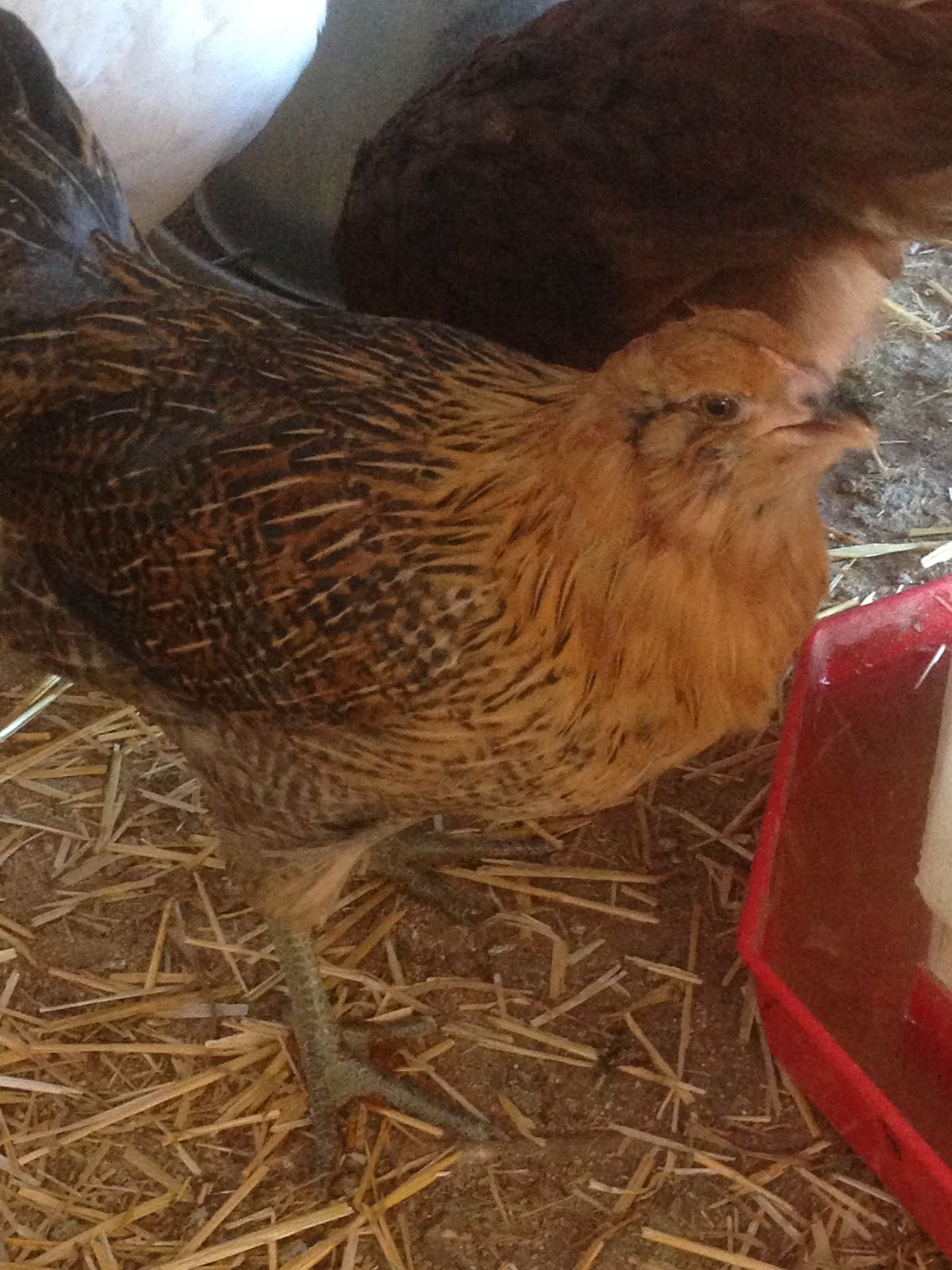 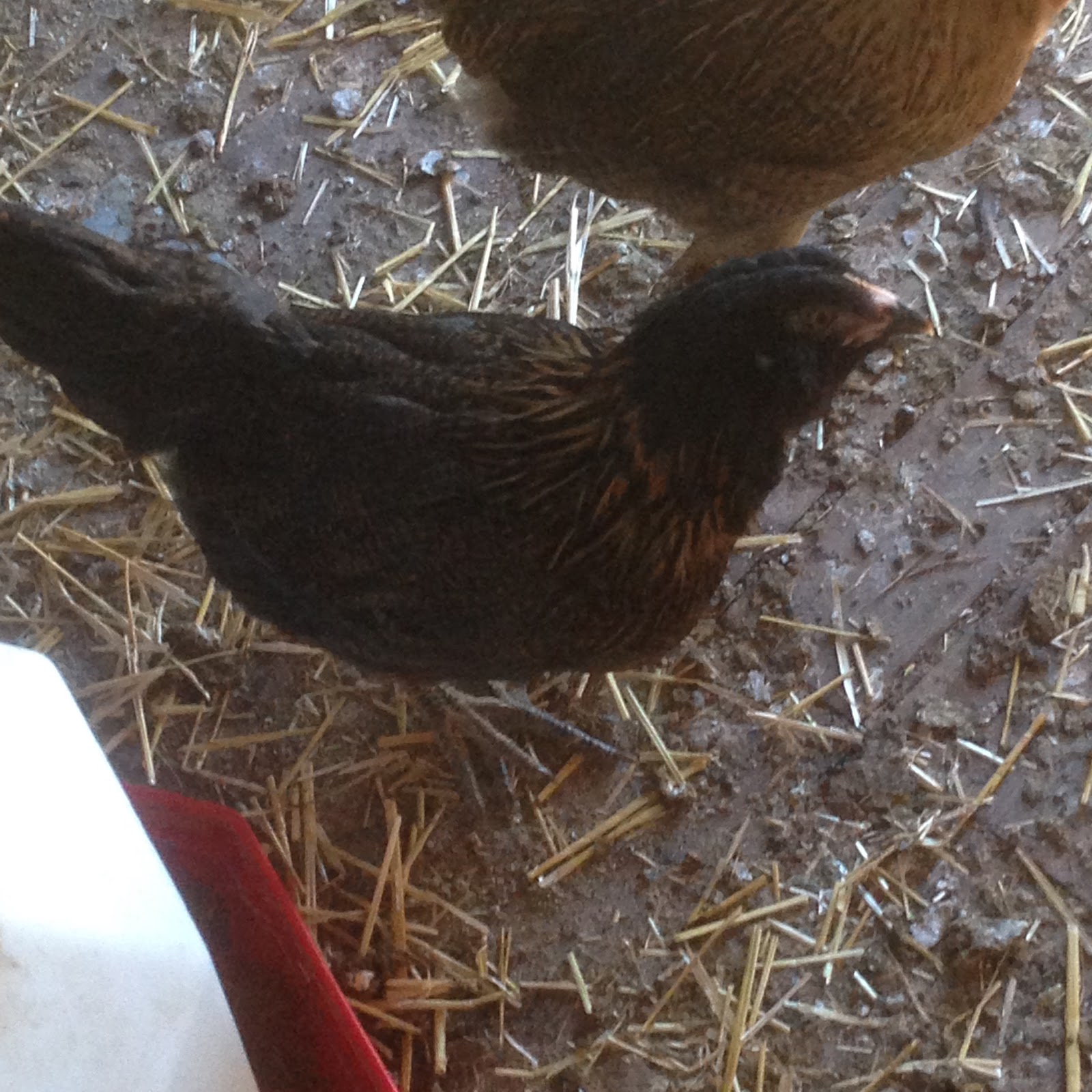 The two pictures above show the gorgeous feather patterns on a couple of our oddballs. Yes, they looked very similar as chicks, but got very different ends of the color spectrum. They're the same breed, for sure, possibly different color variations. I have no idea what breed it is, in my little bit of Googling I haven't been able to find anything in an image search that really looks like them. But my favorite part about these guys isn't even the pretty feathers.... 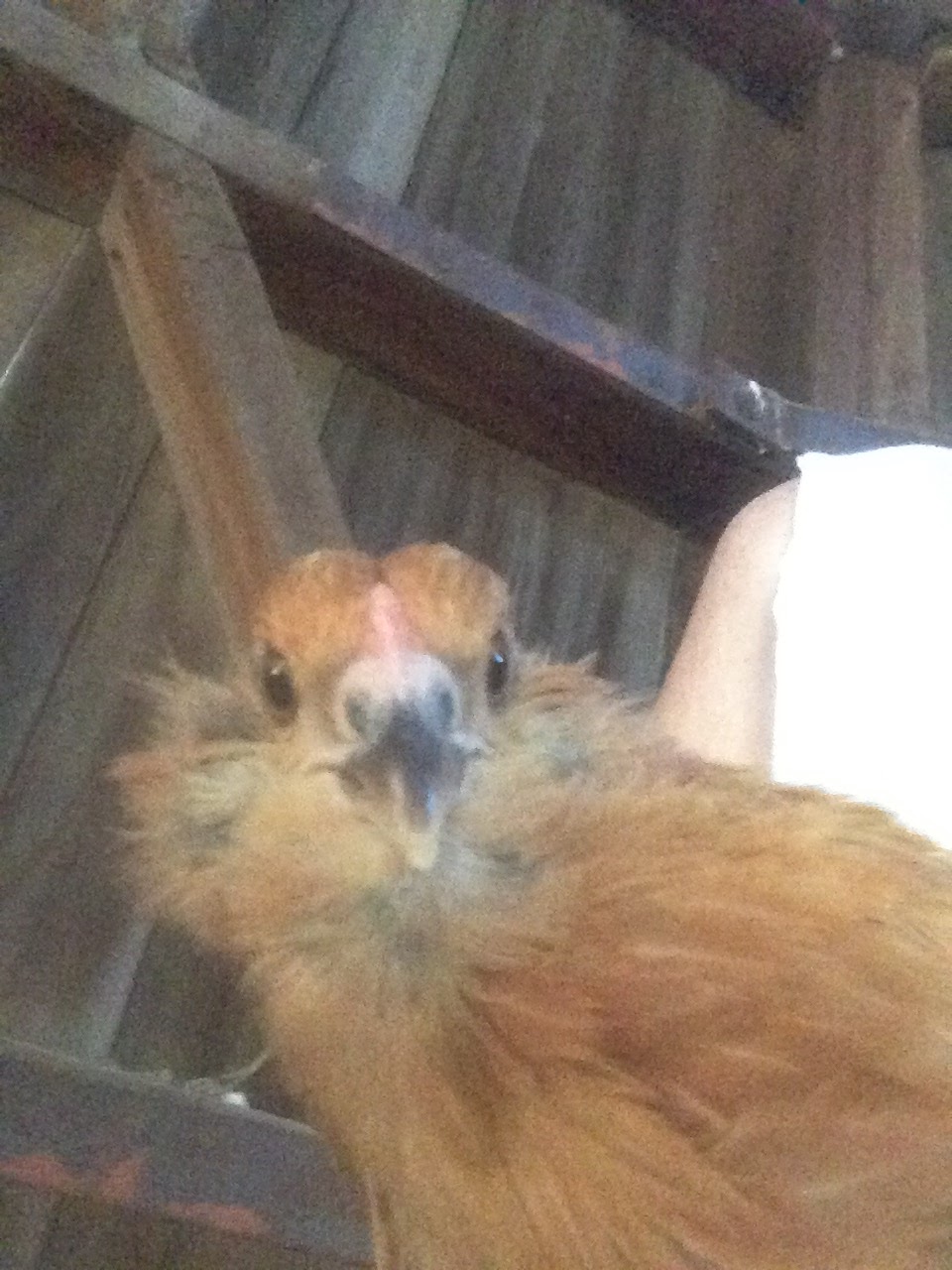 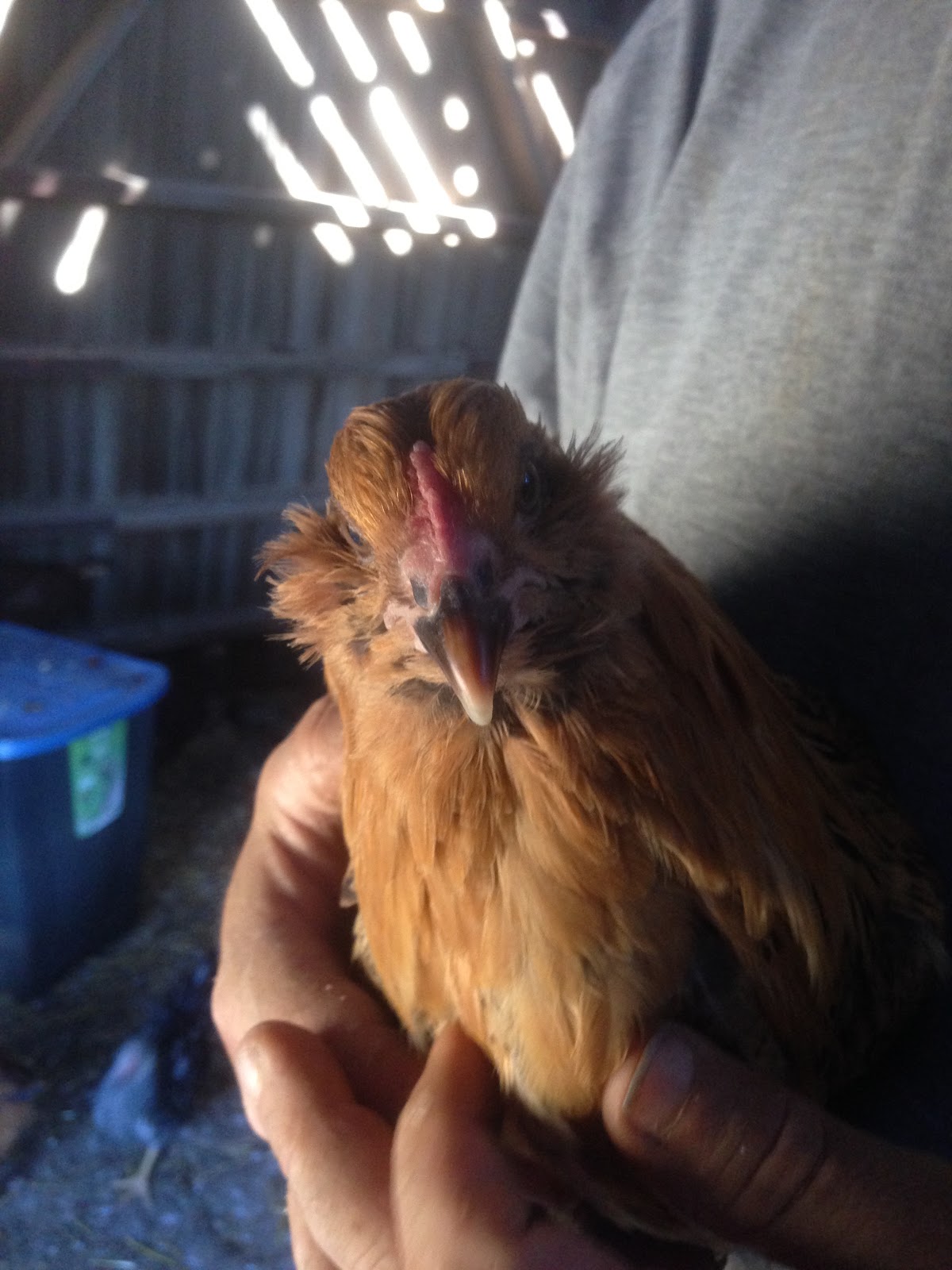 It's their faces! They're a couple months old, now, and I suspect they may go ahead and get "bearded" as they finish developing over the next few months. And one possible reason why I haven't found them Googling is because every time I Google image search for "bearded chickens" I go off on a wander through some really neat and or crazy looking chickens. For now we're hanging on to all of the "chicks" and keeping them separate from the grown flock, because we had some respiratory crud that's proving hard to get rid of come in with some hens mom picked up at the auction about a month ago. I really don't want to lose all of our grown hens, especially the first four we got. They came from a friend (that's how Sonic came named) and are friendly and easy to handle, good influences for the rest of the flock... but if it does happen, as it stands, I have a healthy flock ready to go in quarantine in the chick house. It'll take em a few more months to start laying, but we're not getting many eggs from the sick hens as it is, so we'll make do. I don't want to get rid of any until I know how many we're gonna need, and if all else fails they'll sell just as good in the spring as producing laying hens (better) as they would as pullets big enough to integrate into an existing flock now.
As to why I'm focused on chickens this week, well, a coworker of mine "accidentally" won an Ebay auction for some high-end fancy-dancy hatching eggs, and they're hatching. Shipped eggs are always more chancy than fresh, and to top it off these seem to have come from someone who thinks that you can never have too much calcium in your chicken feed for your laying hens. (Tip: You can. Out of three that have hatched so far two have needed assistance, and I may have to go extreme to get any others out of the shell alive.)
Hatching chicks is fun, assisting a hatch is nerve wracking.
Speaking of, I'd better go check the eggs again and see if any more of them have pipped...
﻿
﻿
﻿
Posted by FarmGirl at 4:56 PM 3 comments: Links to this post