Things have been quiet on the western front around here, and nothing much interesting has happened, which is why I haven't been blogging much.

I doubt ya'll would find a blow-by-blow of combing pork gravy out of FuzzyPup's beard interesting, and that's about the level of excitement we've been getting.

Except for one thing... where we're living now, there's quite a bit of open space and grass about, and we're right near some hills and valleys, so we see a lot of wildlife toward the less populated side of the house.

Including a band of (currently, though it will start changing shortly, they're already starting to break off into singles rather than sticking together) bachelor deer that are rather fond of our back yard and our neighbors'. Mostly because of the crab apple tree. We also have a plum bush in the yard, but between the deer, the first-summer-on-it's-own cinnamon stage black bear, and the birds, they've got it picked pretty well clean.

The dogs are... less fond of the deer being in the yard than the deer are of being in the yard. They lose their minds every time, and though it's usually an early night foray, today one came to visit during the daylight. 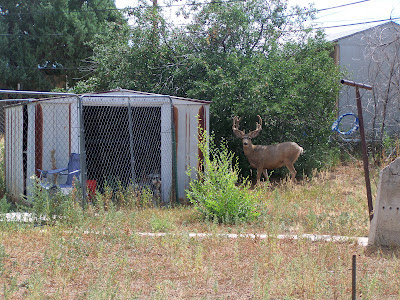 This gentleman is a perfectly respectable buck, but he's not the biggest we've seen. There's one that's got at least another six inches spread on this guy that only ever comes at night, damn him, and likes to tease FuzzyPup through the dog run fencing that you see there on the left. He just stands there and stares while FuzzyPup goes nuts (as he was in a pause of doing in this picture, because he knew that deer was there, even though he couldn't see him, and I was not in the pen with him where he could protect me, worse I was outside the big back yard fence) until either DM or I go out and shoo FuzzyPup back inside. I swear the deer gives me a disappointed look when I come out to break up the party.

Anyway, when the dogs started freaking out and I looked out the kitchen window and saw the above pictured gentleman in the yard, I got entirely more excited than the situation warranted, ran for the camera, and snapped a few quick pictures. This one was just as I had come into his sight line... he spent a few minutes picking up the fallen fruit from the ground under the tree, utterly ignoring me, until I shifted for a better shot and didn't pay enough attention to how I moved my feet.

My shoe scuffed, and he looked at me for a moment before deciding that he was going to take himself off somewhere else.

And that's the level of excitement I get these days.

Posted by FarmGirl at 11:35 AM 4 comments: Links to this post