I am not what I would consider a "Gunnie." I have a working knowledge of firearms, and a reasonable (if extremely rusty) skill in putting the projectile where I want it.

The night before I headed off to the big gathering in Dallas, Farmdad sat down with me, and laid out three smallish pistols. Two Kahr pistols and this little beauty: 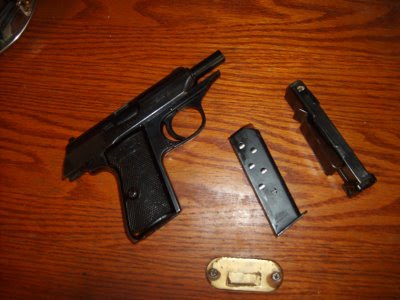 "Any of these will be easier to conceal than your Firestar, and handier for walking the dog at two in the morning," he told me.

I picked up and fondled each in turn, and chose the Walther. What can I say, after carrying the Firestar, the Kahrs just didn't feel like real guns. Plastic toys, not for me.

When I announced my choice, Farmdad said "Happy Valentines Day... early." Apparently, if I'd chosen one of the others, it would have been a loan.

Like I said, I'm not a gunnie, per say, but I am rather proud to have this particular gun. It has a story, almost certainly much more of one than I know.

What I do know, is that it's a real Germal Walther PPK from the 70's. When Farmdad acquired it, it had literally been walled up in a house for an unknown number of years, and was a rusted mess. For it to be functional, it had to be re-blued.

So no, it's not original, but it is functional. It fits my hand, and feels almost as sweet as my Firestar, while being easier to carry. The double-action trigger is heavy, for me and my tiny hands, but then, I'm not used to double-action in the first place.

I need much more practice with this pistol, and my Firestar, than I've been getting, but that's just a matter of finding the time, which I intend to do soon, as the weather is starting to get nice.

In honor of MattG's picture with a full-size 1911 (and to help illustrate why I'm so picky about my guns,) I give you: 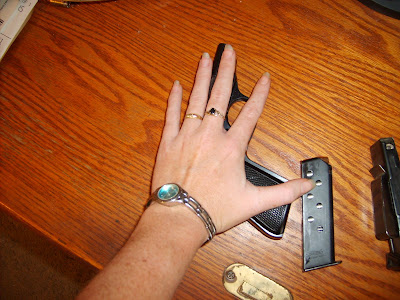 Oh, an interesting piece of trivia about me... I name my weapons. I have a weighted baseball bat named Reason, "Because sooner or later, everyone listens to Reason." I've had that one for several years, before I got my first gun, even.

So, when I got the Firestar (partially as a birthday present, partially paid for by trading in my 20 gauge shotgun) I continued the theme, so to speak, and named the Firestar Logic. "If Reason doesn't sway him, Logic will."

I've toyed with the idea of naming the PPK "Understanding," but it just doesn't fit (the gun, not the theme.) I'm still wavering, between "Brunhilde" and "Gertrude."

I'll figure it out, eventually.
Posted by FarmGirl at 9:00 AM 8 comments: Links to this post