In case anyone forgot and thought this weekend was only about trips to the lake, cookouts and parties, it's not. It's about these men: 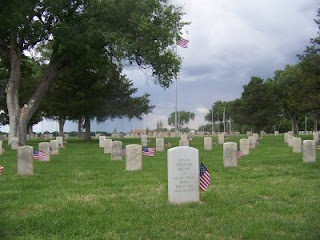 Remember, your freedom, happiness, and long weekend fun are, and always have been, made possible by the men and women of our armed forces. Take a moment between snacks and beers to remember that and say thank you, even if only in your heart.

Posted by FarmGirl at 4:00 PM 2 comments: Links to this post

A conversation with a friend (and a recommendation for her to get one of Michael's holsters) reminded me that I'm long overdue for a follow up on the holster that he and Farmmom conspired to give me.

Re-reading the old post, I see that I was concerned with a slight difference in where I carried and where the holster fit, hoping it would break in. It has, and is as comfortable now as a second skin.

The leather is holding up wonderfully, as is the stitching. It all still looks just as fantastic as the day I got it.

The gun has gotten a little looser than it was, as it broke in, but there has also been a refinish for the PPK since then, so the sandblasting had something to do with it I'm sure.

All in all I am enormously pleased with the holster, and not just because it was a gift. Seriously folks, if you're looking for a quality holster that the maker will stand behind, look into Michael at the link above. Reasonable pricing, quality work, durability and beauty all together. I fully intend to give Michael more of my business in the future!
Posted by FarmGirl at 1:59 PM 4 comments: Links to this post

Just got the invite for the annual cookout and balloon release for my little brother and the two other kids we lost that summer.

Most likely, I'm going to be out of town that weekend, but I will do my best to manage to release a balloon for them.

If I can't manage it that Sunday, I'll do something the day he died, which isn't for another month or so.

Two years. Two years of tears, joys, stresses, life. I still see his face in crowds sometimes. Just out of the blue I'll see someone that looks sort of like him and even though I know it isn't him, my heart skips a beat and I miss him all over again. Worse is when I hear someone laugh like him.

We miss him, and the other two. Last year probably close to two hundred people showed up for the balloon release. Everyone had a picnic meal at the park, and told stories on all the boys, and cried, and hugged. I chased R's youngest kids and made them laugh, hugged her oldest and got her to smile. Teased family and friends and remembered my baby brother.

He'll always be with those who knew him, because he was just that kind of personality. And he'll always be with me, in my heart and memorialized in the tattoo that R and I share. Whether or not I make it to the ceremonies that people have put together to memorialize him and the others, I honor all of them in my own way, in my own time.

The number of cracks on my heart for those that I've lost has grown the last several years. They haven't healed, I don't think they ever do. But I have gotten better able to bear them, and I'm proud to do so. Those metaphorical scars are proof that people have had an impact on my life and I on theirs. Those scars tell me that I learned things from those people that I won't ever forget. The pain of losing someone you love is horrible, but the knowledge that you are the kind of person to care enough about people to be hurt when they're gone can only make you stronger.

Some days, I'm pretty certain that I'm close to becoming She-Hulk from all the stronger I've been made. And some days I hear my grandpa's voice on the wind, or feel Sugar's hands on mine as I'm cooking. Sometimes it's Mamaw inviting the whole world into her home during holidays, if they don't have anywhere else to go. And sometimes it's Jeff, calling me a dork. And in all those things, what I hear or feel is always "I love you."

And I can't help but smile.
Posted by FarmGirl at 12:59 PM 5 comments: Links to this post 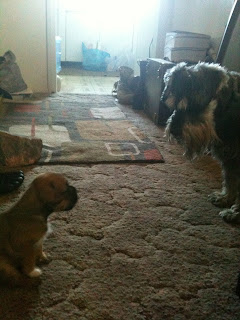 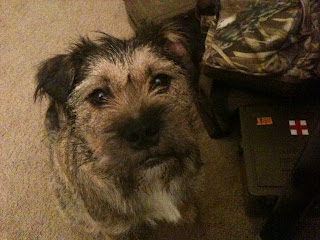 So, recently, I've been a bit caught up in mom's spring plantapalooza. She's starting seeds for her garden this year inside and set up a grow light system. Now, granted, there are a lot of food plants that do well as a potted plant and every little bit helps, but since I'm going to be moving to an apartment soon, I figure something a little hardier is on the agenda for me. 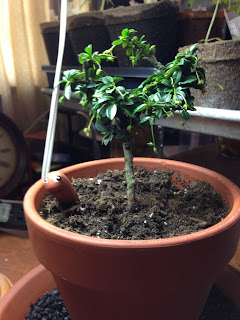 This is my new Fukien Tea tree (yes, Farmdad has already made all the fuckin tea tree jokes, you can rest assured he's on the case.) It's a little tropical so it will be all right inside without a "winter" so to speak. It also produces little white flowers that turn into red berries, so it's pretty.

I had it shipped, and kudos to the nursery it arrived in good health and still moist. This plant likes fast draining soil and doesn't like overwatering, so I repotted it into cactus soil, that being the best draining stuff I could find easily. A lot of people use this for bonsai, and I'll probably do some bonsai like maintenance on it when it starts perking up and growing, because I'm not interested in something I need a dolly to move, I want to keep it small ish. I also used a terracotta pot for a few reasons. Reason one, it was cheap. As am I, mostly. Second, the tea tree likes a humid environment and can be a little picky about it's water, so I figure the pot will help me two ways... first, evaporation from the pot (and the larger tray I've put underneath with the pebbles) to raise the humidity around it since I live in dry-airistan, and second, it can absorb some moisture from the soil and release it back slowly as the soil dries out. Hopefully this will make the plant happy so it can thrive, since I want it bigger than it is, if not as big as it can grow.

I also got a little terra cotta worm thingy to help keep an eye on the soil moisture (and because it was cute and under a dollar.) I have named him Concerned Worm, because he looks concerned about the plant: 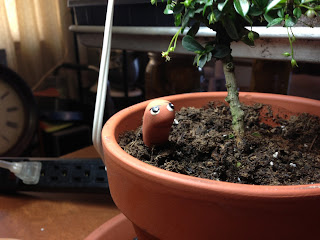 He'll change color as the soil dries out and water is needed. Right now, I've still got tons of healthy green leaves, though Tiny Tim The Tea Tree is showing some stress from the shipping and repotting. I've set up an auxiliary lamp with a daylight spectrum bulb, because mom's garden plants get first call on her lighting system and it's a simple way to give Tim even more light, because light equals food. When the weather settles out and stays warm I'll leave it outside because sun is even better than lighting systems, but the cold nights we've had would kill it.

Watching a plant grow, researching the best ways to care for it, it's interesting and relaxing. Now, if you'll excuse me, I'm gonna leave Concerned Worm to his watch, and get some stuff done around the house.
Posted by FarmGirl at 11:12 AM 2 comments: Links to this post