Saw an article today that got me to thinking about Mamaw.

See, she had a computer for... well, forever. She learned to do accounting on it, had the 3.5 floppy version of a graphics program to make signs. Later on, it was the repository of her photos, and solitaire. But then, I started blogging. After that, nothing would do but I bookmark my blog for her. After Blogorado I, the bookmarks were added to... everybody that attended.

SIL and I were talking about something funny someone had put up on Facebook one day, and then nothing was gonna stop her from having an account. She never posted, but she kept up with everyone else. She emailed and sent pictures, she haunted the Food Network website. She got a phone that would text, and she did, some.

I was linking someone to a post on my blog the other day and stumbled across a comment she'd left.

I was going through some old photos and found some of her riding Etta.

We deleted her Facebook account, but still, because she was who she was, through the internet tribe that we built, through this blog, she left an electronic imprint on the world, in addition to the physical one. 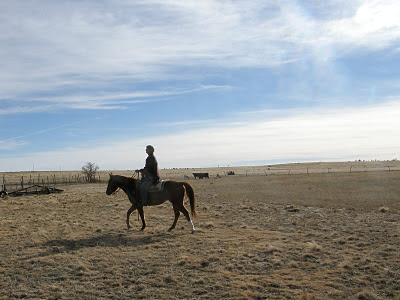 The internet is forever. Thanks to the internet, she can be too. And that is an amazing thing.
Posted by FarmGirl at 5:31 PM 5 comments: