People seem to get confused by the terms we use for our pups when I put up pictures. I can't blame them because the coloration terms make no sense at all unless you know how Schnauzer genetics work. Since I don't have any real content lately (I could bitch about the fact that our living room is a useless waste of space the way it's laid out and is entirely too easy to pile crap in all year because it doesn't get used except for my gaming corner and then September rolls around and it's "holy crap we have to clean the living room out" because company is coming but that's just boring) I decided to do a brief show and tell. 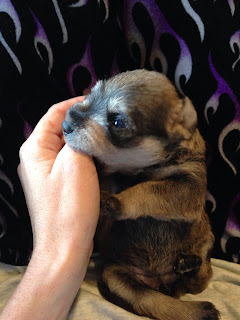 She's a cutie, isn't she? I think she's going to wind up being a pretty close younger female version of her daddy, Fuzzy Pup. She's stout like he is and while it's still early days yet on coats I'm betting she's going to lean more towards his curly ultra soft coat than her mom's more wiry coat. Anyway, this morning we played for a while and then she obligingly fell asleep on my lap after giving up on dismembering me one digit at a time.

You can see in the above photo that she's clearly tan and black. Maybe the light markings on her face could be construed as "cream" rather than "tan" but she's definitely not anything you'd call salt and pepper, right? So is this just one of those weird-ass nonsense terms that people use for colors, like "blue roan" when clearly the horse is not actually blue?

Nope. The reason this little brownish puppy color is called salt and pepper is because of a gene that schnauzers have. This gene causes the brown and tan pigments in the coat to "grey out" or some call it "bleaching out" but I don't like that term because it suggests we're throwing the puppies in the washing machine or something equally awful.

This greying out process starts when they're born, pretty much. Some pups grey faster than others. One of the black and silver males is already just barely cream on his markings, while his brother of the same coat coloration is still fairly tan. So let's take a look at the process in action, so to speak.

Here she is, natural lie to the coat. That really dark streak along her back will probably stay pretty black, or at least be a deep dove grey. Or maybe both. The hairs over her shoulders are banded (the bottoms are black, but the tips are tan) which means that'll probably grey out some, but behind her shoulders and down onto her butt there's no banding and she's blue-skinned there. (If you naired a black and white dog you'd see skin that matches their markings... the black areas would have a skin color that actually does kind of look blue.)

(I hope I don't need to say this but just in case: don't actually nair dogs... beyond just being rude imagine the feeling of nairing your fun bits all over your body.) 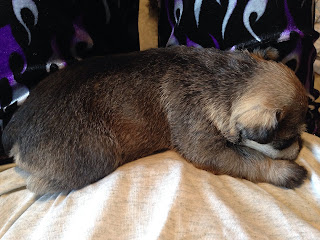 So. How in the world can this puppy turn grey? Well there's a couple of things that do it, functionally. One is that as the hair grows the greying gene works on it, even if the tips don't fade all that much. Lookie here: 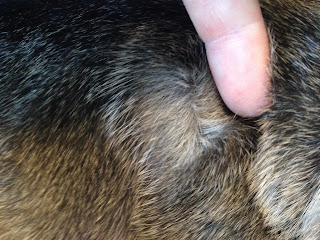 Especially on that left side you can see a really distinct shift. Have another one from a different spot, just to be thorough: 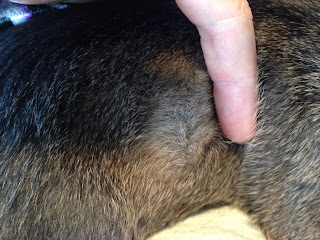 So the tips of the hair will fade out, the new hair growing in will grey more quickly than the hair that's already grown, and depending on the pup, sooner or later you'll get a dog with no brown left, just grey, white, and black. If the process is slow enough (as it may be in this little girl but only time will tell) it's possible that the grey won't show at all until she gets her puppy clip. Basically that's just a quick trim with the clippers, usually just before they go to their new homes, in a general approximation of a schnauzer cut. This does a couple things, first off it makes em look good for their new people, which is always a plus, but more importantly it makes their first experience with a set of clippers happen in an environment where they're comfortable, with people they know.

If a pup greys out slowly enough, it's possible that after their puppy clip, you wind up with a really weird looking pup, showing grey everywhere it was clipped and the tan everywhere they will eventually have "furniture." (That's the completely ridiculous and arbitrary term for the beard, eyebrows, and long hair left down the sides and on the legs of a schnauzer.)

That's where the second process I talked about earlier kicks in. Because eventually, the pup grows it's adult coat and loses the puppy coat. And the greying gene works on any new hairs grown from the get-go, instead of coming late to the game like it does when the pups are developing in the womb. So the new hairs will grow in already grey.

Another neat factoid about this gene is that while the new hairs grow in already grey that doesn't necessarily mean the gene shuts off. Fuzzy Pup is a beautiful deep velvety grey on his back when he's clipped. But let him grow out for a few weeks (or months, man I gotta get him clipped he looks more like a sheepdog than a schnauzer) and that deep lovely grey will fade to an equally lovely light grey, and eventually a silvery color on the ends.

Fuzzy Pup's dad has the same trait, where his coat will silver out if you let it grow long enough. The neat part about that is that Fuzzy Pup's dad is black.

There are other animals with color-change genes, too. Certain wild canids grow a different coat color for winter and summer, I've had a horse that I don't know what gene was responsible but she'd shed out a different coat color every spring. And the beautimous white Lipizzaner breed of horse, famous for all of those heart-stopping airs above the ground? They're born brown or black.

It's true though that few genomes are as flexible as the canine. The dog has gone from wolf to shi-tzu in a remarkably short amount of time, evolutionarily speaking. Look at the breeds that have been developed and reached the goal of the human mastermind behind it in a lifetime. Or even over a hundred years.

Dog: the longest running genetics experiment in history, and it's still going on.
Posted by FarmGirl at 10:05 AM 4 comments: Links to this post