After a couple of days of no results finding the pup's owners I had just about given up.

Then, last night, a little blond pixie walked into the store, and looked up at me with tear filled eyes, saying "I heard you might have found my puppy. We thought he was dead..."

Her mother followed and explained that they had been on their way to Slightly Bigger Town on Tuesday, with the pup in the back of the pickup in a kennel. When they arrived in SBT, they discovered that the kennel door had come open, and the pup was gone.

The little guy apparently took a header out of a pickup going highway speed, and not only survived but did so with only a little scratch. Then he survived two days in the ditch without getting hit or eaten.

The mother was hesitant, saying she supposed he was fairly banged up and probably not moving well. I could tell she was worried he was seriously injured and might have to be put down, but didn't want to mention it in front of her daughter.

She stared at me slack jawed when I told her he was fine, just a small scrape on his belly that was already mostly healed.

They waited around for ten minutes or so until I got off work, then followed me to the house. I went in and snagged the pup and took him outside, and the little girl came running up the driveway to take him from me.

As soon as he saw her, his whole body started wagging, even being held.

She shoved a wadded up something at me as she hugged him and he kissed her face like she was covered in puppy food, and I took it, thinking she wanted both hands for the pup.

Her mother called and as she turned away I asked, "What's his name?"

When I looked at what she'd handed me, it was a much crumpled and folded twenty dollar bill.

Frankly, seeing her and the pup reunited was all the reward I really needed....

I am kind of sad, I'd sort of gotten attached to the little bugger, but he's back with his people now, and I don't think they're going to leave the kennel door even slightly unlatched anymore, if the little girl even lets him ride in the back.

DM is a huge fan of eating with chopsticks. His military career coupled with several years working for outdoorsy go do this type outfits and basically living out of a tent or hotel room left him with a definite speed-eating disorder. When we eat together a lot of times we only spend half the time eating together... he'll finish and I'll still be eating. We talk, its not a case of him sitting there staring at me chewing my food, don't get me wrong.

Anyway, he feels like eating with chop sticks slows him down so he eats, as he puts it, "Like a normal human." So, he does so whenever he can.

To add to this tale, we both love Chinese food. He asks for chop sticks every time, and calls me a gaijin barbarian for eating with a fork. I just smile at him serenely and respond "Yep."

Or tell him that chopsticks come from countries where there isn't enough food so they have to make it last.

I've tried chopsticks before, I just don't have any skill with them, and when I'm eating, I'm hungry, and I don't want to take five minutes per bite to maybe get it in my mouth and maybe on my shirt.

DM being the dear (stubborn, pigheaded, obstinate) man that he is, and determined that I should learn to eat with chopsticks, ordered some of the little kids' training chopsticks for me.

He brought them over the other night and presented them to me with great aplomb. I was so very overwhelmed that all I could think to say was "I am not eating with a giant clothes pin."

I thought he was going to wet himself. So off we went to eat Chinese where he muttered about gaijin barbarians and I gleefully shoveled broccoli beef into my mouth while he wrestled a bit with the last of his beef chow mein before giving up and going to a fork for the last several bites. (See?!?)

On the way home we were discussing the chopsticks issue yet again, and he finally got frustrated with me calling them a giant clothes pin.

"They're not a clothes pin. They're spring... sprang.... sproing... sproingyboingyboingy.... they go the wrong way damnit!"

All while doing the chopstick-y motions with his fingers.

Quote of the year, I think. It was quickly followed up with "That is not getting blogged."

When I could breathe again, I replied "Oh yes, yes it is."

If there were no other reason for me to be completely head over heels for this man (and there are, ever so many) his ability to make me laugh until tears run would be enough.
Posted by FarmGirl at 9:40 AM 6 comments: Links to this post

Life has been rough the last bit, for various reasons. It's been about all we all can do to keep up, frankly. But every time I think I just can't do it anymore the universe seems to give me an opportunity to prove myself wrong.

Today mom found this little guy on the highway. How he didn't get hit in the middle of nowhere I have no idea. He's got a couple of scrapes and some kind of infected gland or something on his poor butt, but in spite of being abandoned and roughed up a bit he's still friendly and people loving. He's sharp as a tack too...

So yes I can do it and help this little guy too. Because that's what I do.

- Posted using BlogPress from my iPhone

Posted by FarmGirl at 5:30 PM 12 comments: Links to this post 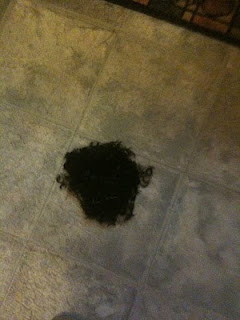 That is all.
Posted by FarmGirl at 12:52 AM 8 comments: Links to this post

How having bigwigs doing a five minute visit to look around and say "oh we carry that? Neat!" will cause people to do their jobs in regards to cleaning.

If you'll excuse me I'm off to draw a pony on a pizza box or alphabetize the lottery tickets or some other useless time wasting thing cause I'm out of stuff to do for the next hour or so.

Tomorrow it's back to the night shift can do everything I'm sure.


- Posted using BlogPress from my iPhone

Posted by FarmGirl at 9:51 PM 2 comments: Links to this post

This weekend I was in a city large enough to actually have panhandlers, and as usual I was seeing them at relatively random intervals. DM needed to make a stop at Home Depot so we swung in there, and at the entrance I saw the usual dirty looking person with a cardboard sign.

I don't give money to panhandlers because I always get that knee jerk "I work for my money" reaction. Because I'm a bad person I like to read the signs and rate them for originality.

This one broke the rating system:

"Bet you can't hit me with a quarter: Double or nothing"

I turned to DM and said "It's almost worth a quarter just to have the satisfaction of beaning him in the head with it."

DM chuckled and said "It'd be worth a dollar to me if we had a golf ball to wrap it around."

Yes, we're horrible people, but at least we didn't actively go looking for a golf ball.....
Posted by FarmGirl at 9:59 PM 4 comments: Links to this post

I get that the weather sucks. I get that you commute forty five minutes each direction.

Here's the thing though. You chose to transfer here without moving. You chose to get a sitter here rather than in your home town.

So when the weather sucks and you have to drive home in it with your son?

I don't feel any sympathy for you, so you can stop complaining.

Also when you leave early and get bored don't text me to see how things are going. I'm a little cranky that you left a contrail as soon as I walked in the door to start with so hearing from you as you sit on your ass at home it's exactly the highlight of my night.


- Posted using BlogPress from my iPhone

Posted by FarmGirl at 10:37 PM 4 comments: Links to this post

In the last few weeks it seems like every time I turn around I'm hearing a phrase that really ought to be a name for a punk band.

The best so far is a band name/album combo that DM and I discussed, so I'd like to solicit volunteers to put together the band and do the album.