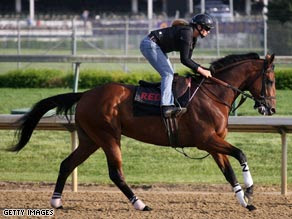 I promised you guys a post about Big Brown, but I didn't get back to it yesterday so here it is.

Big Brown. Gorgeous, fast as hell, and, holy shit, a racehorse with manners!

This guy is just a freaking freight train on the track, and a lovely one to watch at that. He's sleek and muscled and just a beautiful specimen.

The thing that surprised me the most about Big Brown, however, was not the ease with which he overcame his 20 post start, or the way he flew by the pack and cleared the finish line all by his lonesome, in spite of his fragile feet.

No, what surprised me most was his behavior. Anyone who watches horse racing knows that racers, by and large, are a high strung, ill mannered bunch. Trainers are afraid to kill their spirit, so they tend to let manners slide, and they're focused on speed, so they ignore the finer points of training.

If you look at the above picture of Big Brown, however, you'll see that he's bent at the poll, flexing his neck and "giving his head back" to his rider. He obviously wants to keep going, but he is listening.

It's so refreshing to see a horse that has that kind of speed and heart, also being given training beyond the required lead changes, and go go go.

It's a bonus that he's such a gorgeous boy, as well. I see many many girlfriends in Big Brown's future. Of course, the smart breeders will breed him to mares with feet like iron to try to overcome his brittle hoof walls, and to keep from reinforcing that fault.

But, as it stands, I think that Big Brown could have won the Derby blindfolded, with no jockey. This is a horse that was born to run, who loves his job, and is magnificent at it.

Keep your eyes open, folks. I think that, barring injury, Big Brown is going to breeze over the finish line of the first Triple Crown victory in thirty years.

The term "Cinderella Story" is apt enough here, as everyone was questioning his victory at the Derby because of his foot problems. Plus, here's a horse that's running on glass slippers, in the form of thin, fragile feet.

Pray that he doesn't lose one before the end of the ball, we need another Triple Crown.
Posted by FarmGirl at 7:17 AM 2 comments: Links to this post