The bookbag that was stolen from my car was host to a collection of pins and little things, just personal touches that I liked. Three of the pins were from the comic A Girl And Her Fed, which I simply adore. It starts out as seriously political in the beginning, and morphs into something a bit more whimsical as it goes along.

Who doesn't love a talking, code cracking koala named Speedy? Who wouldn't want a pin of a Koala with a gun? No one, that's who.

Brooke Spangler, aka Otter, the artist and author of the comic, is very in touch with her fans, and, since I was feeling depressed over the loss of the AGAHF pins, I figured that someone ought to feel good about it, and wrote her an email, about how much I missed the pins, and how I planned to replace them as soon as finances would allow.

She thanked me, and said that she would like to replace the pins that I had lost. After wrestling with my concience for a while (the sales of the pins and other AGAHF paraphernalia are what funds the webcomic's operations) greed won out and I agreed to give her my new address. Three pins, fifteen bucks. Not a huge amount, but not money that I had to spend, either.

Yesterday, I received a package in the mail. I recognized the return address, having ordered swag from her before, not to mention one of the comic's characters displayed prominently on her return address labels.

Except... the package was... poofy. And soft. And way too large to contain three pins.

Inside was a medium sized bag, covered in pins and buttons. 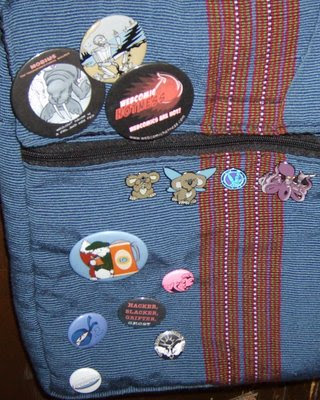 The four pins below the zipper are the cloissone pins that Brooke sells. The first three, left to right, I had. The fourth, I didn't. I also didn't have any of the buttons that are arrayed over the rest of the bag. In case you can't see, the very top pin is of a tanker in the background, spilling oil, and in the foreground is a robot, kneeling on a beach, picking up a dead bird, and flipping off the tanker. I love that one!

The note she included said "Hope this gets the collection back on track."

Oh, it did, Brooke, it did, and so much more. I was utterly speechless when I opened it, too. The roommate thought I was having a heart attack.

Now, I just have to get back to trying to figure out how to turn a cloisonne pin into a hat pin, so that I can have a koala with a gun on my Stetson....

Oh, and I'll be pulling Etta's tail to thin it out soon, and I'll be collecting the hairs that I pull to braid into a bracelet, to include with the pictures I'll be sending to Brooke with a thank you note. I may be broke, but I can still say thank you with a little class!
Posted by FarmGirl at 8:55 AM 2 comments: Links to this post