Cattle, The New Horse, and Incidentals

Rebel, my latest equine acquisition, and I did most of the sorting, and it was a blast! Here are some pictures of Rebel and I working in the herd: 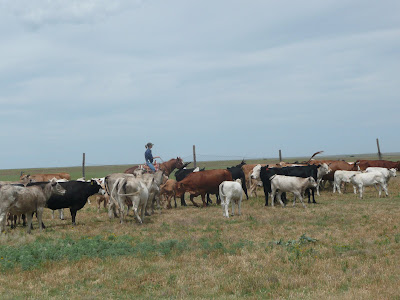 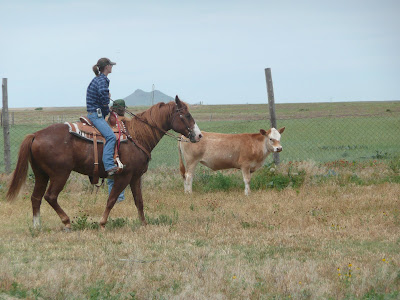 I really couldn't ask for him to work better in the herd, he's nice and calm and just relaxes as we shuffle through the main body of the herd to get to where we want to be. And he's got heart, he never quit on me all day. 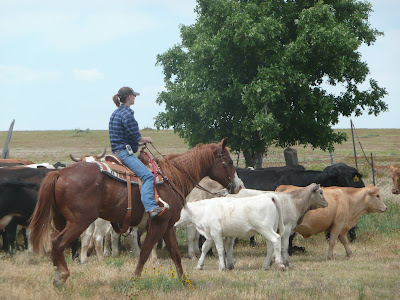 Besides, our cattle are mean, and vicious, and will just eat you alive... literally: 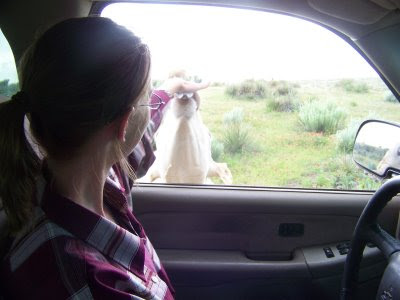 This little heifer is one of this year's calves, and she seems to have come up with the idea that people are meant for paying attention to her all on her lonesome. She'll come to the door of the pickup and let you pet her nose while she uses her sandpaper tongue on your other hand, and tries to get it in her mouth to suckle on. You'd swear she'd been bottle fed, the way she acts, but she's just decided she likes people flavor.

Of course, if you scratch under her jaw, she forgets all about nomming on your hand and simply goes into a blissful trance. Note the expression on her face in the rear view... that's one happy heifer. 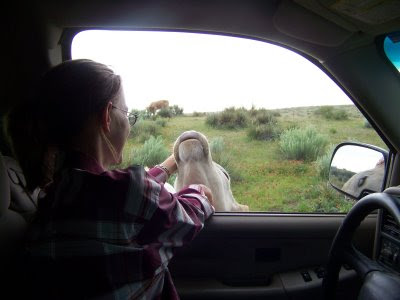 I'm thinking of naming her Cookie Monster. Ironically her mother is one of the more flighty cows we have, and wants as little as possible to do with people.

We took four of last year's late calves and three cows that weren't producing, one of which was the big red blaze face horned cow that we all hated, because none of us had any doubt whatsoever that she'd take us given half an opportunity. Plus, when we sorted her off to load for sale she jumped flat footed over two pen fences, and back over one of them. She was just a pain.

The point of this story, aside from yay the evil cow is gone, is that when the announcer at the sale (not the auctioneer, but the guy who announces the origin and anything else they know about the cattle) announced our heifers, he made the quite understandable mistake of announcing them as the Step Grandpa's. Well, his name IS on the brand as well, but he didn't raise these, so when the two bull calves came in and he announced the same thing, I yelled across the ring that they were (FARM) bulls.

At this point Farmmom was trying to inch away from me without being too obvious.

"Are you related to (Step Grandpa)?"

"Well, then, that's how you got to be so good looking. All right we got these good looking young (Farm) Bulls..."

And the bidding actually went faster than it had on the heifers. I maintain that I helped.


*Anywhere I have parenthesis around names what was actually said was my real last name, or step grandpa's last name. The whole anony mouse thing works better this way though.
Posted by FarmGirl at 11:45 AM 6 comments: Links to this post