The kittens are doing well, gradually getting more liking for people (even if only as a combination of Mount Everest and the worlds greatest jungle gym) and eating well.

They're starting to play a bit with each other and will chase things, but have absolutely no idea what to do with them once they catch up. They just sort of look at whatever it was like "well, now what?" and then wander off in a different direction.

I figure these guys are at about three weeks, more or less. They're a little stunted, size wise. For one, feral cats don't get the loving care and nutrition that pets do, and that can make a huge difference when momma is nursing. So they don't grow as fast, but they're more likely to have a bigger growth spurt around the time they start being able to hunt for themselves, instead of a fairly steady upward trend.

These babies had been on their own a day or two, and they were pretty dehydrated. We're getting them brought back from that but it's a slow building rather than an immediate fix. They're not in any danger, just building back up from where they were will take some time.

And lots of patience. For now, they're mostly living in a small kennel, where they can feel like it's a den, it's easier to clean up after them, and we don't have to play "oh shit where's the kitten" for most of the day. Also, it helps keep the interactions with the dogs to supervised levels. None of the dogs are too likely at this stage to just kill them out of hand, though that was a concern for a bit since most of them are terrier types and the kittens look more like big skinny rats right now than anything. But, a couple of controlled introductions have been made, me holding a kitten on my lap and letting everyone check it out where it was clear that it was ours. The kittens seem to be taking most of the new stuff with the attitude of if I don't like it I can't change it, but I don't have to be happy about it, so they did ok other than looking for a way down to the floor so they could find a place to hide.

Jezebelle seems to go into this weird super-mom on speed mode around them. She knows they're babies, and wants to mother them, but isn't sure why her licking them doesn't make them stop crying, so her solution is to lick faster damnit. Which, many of you might guess, does not exactly make the kittens stop crying.

Caring for three week old kittens isn't as difficult as it is with younger babies. At this age they can manage to eat from a dish, though they're not very good at it, but will eventually fill their bellies without having to resort to a bottle. They can also manage soft food, especially if you mix it with a little milk to soften it further. It's not a matter of their teeth at this stage really, most of them have a decent enough set, but they're still tender and they really don't know what to do with them yet. They're in that weird half stage between nursing and eating grown up kitty food, which momma generally handles by kicking them the hell off the teat when they bite too hard, and making sure to bring them some grown up stuff to gnaw on instead of her. Unfortunately it's not that easy when momma isn't about, though it's not hard either, just time consuming and messy.

For now they're getting soft food mixed to mush with milk. Couple reasons, one, it doesn't hurt their teefies so they can eat more quickly and two, they need as much nutrition as fast as we can manage right now. They wouldn't die if I started easing them towards more solid foods by a long shot, but I will feel much better when they get some decent weight on themselves and start muscling up some more. I'll probably start alternating plain soft food and the milk mush in the next couple of days.

Partly because of this: 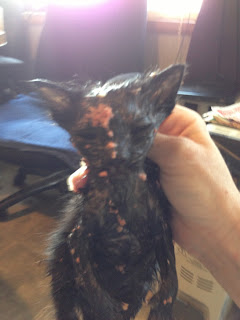 At this stage, and especially since they went hungry for a while, they're really territorial about food, and still pretty well equating all food to momma's teat, in terms of how to get it or get more of it. So, they push, and shove, and wallow in the food dish. And get absolutely covered in it. Don't worry, I gave that one (which happens to be the one named after Stingray) a wipedown right after I took the picture. They're starting to try to clean themselves, they'll lick at their paws and make an attempt at cleaning their faces, but they just haven't gotten it down yet. Which is why every couple days we absolutely have to do this: 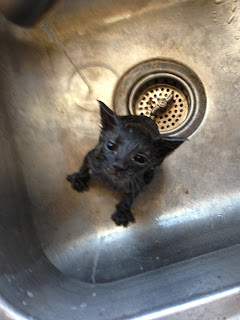 First bath ever yesterday, they were not impressed. But they smelled better afterwards.

Not so incidentally, these pictures are being shown in reverse chronological order. Baths yesterday, the ridiculous level of mess above at breakfast today. Patience, which, though I seem to lack it in a lot of other areas in my life somehow I manage to have just enough of when it comes to animals, is a very important part of hand raising any young critter, but seemingly especially cats. Kittens will make more fuss than puppies, sleep lighter, make bigger messes for their numbers and can cause way more inadvertent minor injuries with those claws than puppies manage with their teeth. And it's really easy to forget that they have to learn to be neat and clean and not wallow in their food dish, when they're covering themselves in a sticky glop at least three times a day.

But, mostly they nap, with the aid of a youtube video I found where someone looped up nine hours of cat purr. And that's ok, at this age, that's what they should be doing. Eat, play, sleep, repeat. The purr helps them sleep better, with it going they don't startle awake crying at every single sound. Though, it isn't quite so beneficial to me since it makes me sleepy as hell too. Small price to pay, though, for well rested, non-crying kittens.

More updates as events warrant, or when I manage to get decent pictures of them looking cute. So far, that hasn't really happened, lol.
Posted by FarmGirl at 12:29 PM 5 comments: Links to this post