We had a lot of fun this weekend, and the horses all did very well... most especially E's horse Rebel, and T's horse Tori. Those two ponies worked their butts off, they were the most experienced out of all of the ones we had helping, so they did most of the chasing of the strays.

Of course, Rebel gets a gold star, because right off the bat, the cows were nuts. Once we got them across the highway, it was all good, and everything went smoothly, but to start with, they didn't want to do anything that even resembled cooperating.

One of mom's precious Hereford crosses decided to go all evil and start ramming the horses... Rebel got hit a couple of times, and she crawled right up Monkey's butt, lifted him off his hind feet.

I gotta tell ya, I thought I was a goner. I looked back just in time to see her dropping her head to hit him, and I figured either he was gonna leave me there and head for the hills or we were going for an e-ticket ride together. I had time to think "oh, shit" and then she hit us.

I am so proud of Monkey, though. His only reaction was to kick her in the face and run forward a few steps, then go looking for more work. Spooky horse my ass!

Of course, another of the cows was being the shits and not staying with the herd, and E had to rope her and drag her back... Rebel worked his butt off hauling that cow around, until we gave up on teaching her to lead with the horse, and tied her to the pickup and let dad drag her around... but E and Rebel got her a long way... even if E did have to adjust his dally a few times.... 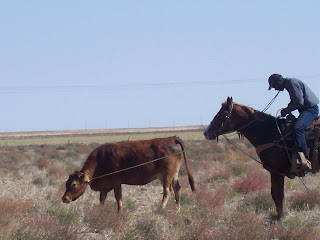 I just love that picture.

S came with us too, brought her horse Diablo, and he and she did really well for never having seen a cow before. Farmmom got to ride Diablo for a bit, while the cows were being stupid and we needed another person that knew what they were doing, and it just made her day.

Once we got them across the highway things went better, they moved a lot easier and we got to where we were going... Long after I had figured, but we got them there.

E's camera was there too, and there's a bunch of pictures on it, I'm waiting for him to email them to me, and then I'll share some more. I don't know what all they got with his, but he said they got some good ones, so we'll see when he gets them to me.
Posted by FarmGirl at 1:39 PM 14 comments: Links to this post