For anyone who might be wondering how Tiny Tim is doing, well, here he is today: 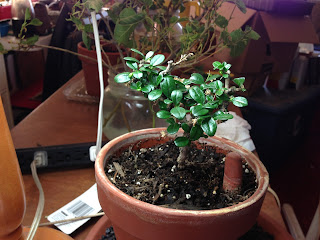 Photo is of the "back" side relative to Concerned Worm because that's where the most greenery is. I assure you Concerned Worm is still concerned. Anyway, I'm learning a lot taking care of this little tree and encouraging it to grow. I did let it get a little dry and it dropped all the leaves, which made me very sad, but a little TLC and paying more attention to the watering and as you can see the leaves came back. The Tea Tree is happy enough to be flowering and making berries again, so I must be doing something right.

In the near background there you can see my latest experiments in cuttings from the fruit trees at the farm (just ignore the further background, the living room is a mess.) Took those a couple days ago and stuffed em in some water and rooting hormone, several cuttings from each tree (ok I only took a couple from mystery trees, but I got several mulberry and several from the known pear tree that DOES produce) so hopefully some of them will survive.

I tried the cut off a chunk and stick it in dirt and hope method a while back, but the only things to survive (out of a bunch of cuttings) were two of the mulberries. Sort of. They're not completely dead yet. But they're not exactly thriving. We'll see how they do from here on out, but that's why we've moved on to a different method this time. I'm pretty sure the wind didn't help on the others, but since these aren't in dirt and are smaller cuttings which would be prone to flying away, they're living on the plant table with Tiny Tim at least till we see what they'll do.

There are a few reasons I'm wanting so badly to get cuttings from the fruit trees at the farm going. One is that mom and dad would like to plant more of them, and since Mamaw was a plant nut we already had a lot of what we needed, just had to buy soil, which makes it a lot cheaper (even with a lot of failures) to propagate cuttings than to buy trees. Another is, again, the bonsai thing. Come on, tiny fruit trees? That's just neat. And not at all least, since I'm going to wind up away from the homestead, little potted clones of the trees from the farm and ranch will let me take a piece of the homestead with me.

And, I'll always be able to remember the day I gathered the cuttings, since we stopped by to see the horses while we were in the vicinity to get some cuttings from different mulberries and the pear tree that Farmdad's horse Thunder used to stand on his hind legs to reach the high branches to pull fruit off of. I had my bucket of water for the cuttings in the back of the pickup, and Etta is... well she's a snoop. She's always checking the bed of the truck for goodies, any time we stop by. So of course she checked it out this time and lo and behold a bucket of water!

Deciding that it must be for her she drank most of it while I was loving on Joan. Then I got a water bottle (she likes the way the plastic bottles crinkle and make noise) to distract her. She didn't want to take it and play with it so I took off the cap and let her sniff it. By the time we were done with that game I nearly had her drinking from the bottle, but I still had to stop by the tank and refill my bucket. Thankfully we visited the horses first or she'd have eaten all my cuttings!

Then on the way back to the homestead, after gathering cuttings in the rain (glorious rain!) we saw something odd in the rear view and thought it was a fire from a lightning strike, so we hustled up to the house to drop off the cuttings since we were nearly there, and were about to head back to help out when we realized it wasn't a fire:

But a tornado. A small one, but very odd. You can't really tell from this picture but it's on the trailing edge of the storm, when tornadoes normally form on the leading edge (in fact one did form on the leading edge of this same storm, south and east of us.) It's also moving south and east instead of north and east, throwing two "this is what tornadoes do" rules out the window. It wasn't big enough to do much damage, though I'm sure any crops it went over didn't appreciate it much.

Farmmom and I stood around and watched it till it dissipated, taking pictures and enjoying the bit of cool down from the rain that came before it.

Posted by FarmGirl at 5:52 PM 2 comments: Links to this post