He's pretty much been my life since Saturday. 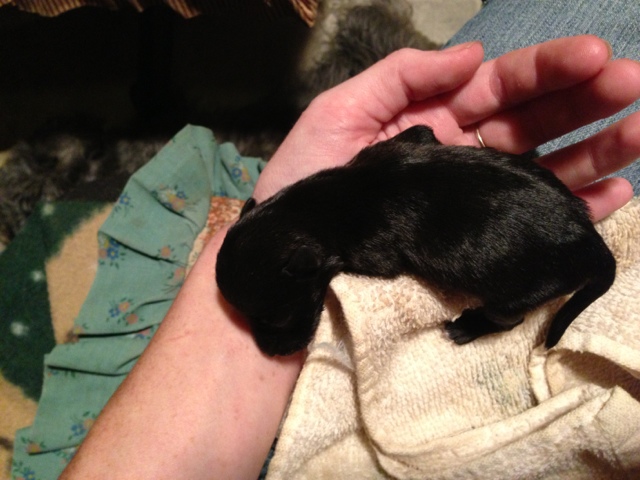 He's one of Jez's pups. A very special pup at that. See, Micro was probably a late fertilization. A product of a mash up of timing and fate to leave him with just a little less time to develop than everyone else.
As a result he's got a cleft palate. Not even terribly cleft. Near as I can tell there's only one spot that is actually open to his sinuses, behind where his front teeth will be. But it means that a lot of things have to go just right before he can suck. He's managed it, but not consistently enough to keep him going.
So when it became clear he wasn't doing well on Sunday, and I found the cleft, I started supplementing him.
And frankly I was failing miserably. I'd never had to deal with a cleft puppy before. I knew they could be bottle fed, but most people recommended tube feeding instead. Unfortunately I didn't have the equipment or the skills for tube feeding. So we struggled on with the bottle.
We found a position that he didn't seem to flood out in as often. We let him work on the bottle until he got tired, gave him a break, and started over again. We managed to get enough in him to keep him going, but that's it.
By Wednesday morning I was pretty sure he wouldn't be alive for the next feeding. At four am I got up and he was still there and I prepared to spend an hour fighting along side him, because he just refused to give up, and I couldn't do any less.
I was sitting there, extremely fuzzy headed from lack of sleep since I hadn't gotten more than an hour at a stretch for a couple of days, willing milk replacer into his little tummy. Nearly crying over how skeletal he was, but if I cried I couldn't see the occasional bubble coming out of the nipple, the only real sign of success I had.
I thought to myself "If it were any other puppy, I'd be able to put him on his back and let instinct take over- swallow or drown. But he's already risking drowning every time he eats. And worse when he's flat on his back."
Pure stubborn refusal to give up had gotten me this far. I'd been asked by the vet if I was sure I didn't want to put him down, but I simply could not give up on him. I believed he'd probably die anyway but at least he wouldn't be the only one fighting for his survival. He could get some suction on my finger, since it blocked off the cleft, but I hadn't been able to find a nipple that worked for him. People baby nipples were just a bit too big and stiff to work any better than the puppy nipple which was too small to let him get sealed off.
So at four am with a severe lack of sleep and grief waiting for me I dug deep down inside and found a new level of stubborn. And I started changing his angle a little at a time. Flat on his back was no good, he flooded out and we had to take a break to let him point his head down and suck on my finger to clear them out.
Straight upright with his chin tipped up worked a little better but it was a struggle keeping him there. He didn't like pointing his nose to the sky. And he still wasn't getting enough.
So I split the difference. Halfway between on his back and basically standing him up on his butt.
And the bubbles started rolling. I'd been scared of any positions even close to on his back because he flooded out so bad the first time I tried it.
But we found it. The position that let him work the puppy nipple I'd opened up so that the slightest squeeze would give milk. The one that let it roll to where he could swallow and bypassed the cleft.
And at that feeding he ate as much as he had the entire day before.
An hour later it worked again. He didn't eat as much, but he wasn't as empty starting out either.
All day it kept working. Sometimes more milk sometimes less. I figured out that two hours between feedings worked better than one. At an hour he still had milk in his belly enough that he was prone to starting to doze off. Which meant he wasn't swallowing as efficiently and he was more likely to flood out. At two hours he was ready to get his belly full again.
And throughout the day, I saw him gaining physically. He rehydrated, and his ribs ever so slowly hid back behind a layer of flesh instead of pressing up against his skin.
He's not out of the woods yet but he's headed in the right direction. Every couple of hours he gets his belly really full, then goes back to his momma for cuddles and cleanup. He's still miles behind the others, size wise. He probably won't catch up to them, but he's leaps and bounds ahead of where he was.
As I write this Jez is outside for a potty break and the puppies are all napping or jostling for position. Micro is almost due for another meal but he's willing to nap till it shows up, if the big lunks will let him lay on them.
I think Micro has taken over the motto "Never give up, never surrender!"
He's not in the clear, there are dozens of things that could still go wrong. But there's an inkling that there might be a light at the end of the tunnel now, and I know he won't stop fighting for it.
How on earth can I do any less?
Posted by FarmGirl at 9:47 AM 7 comments: Links to this post