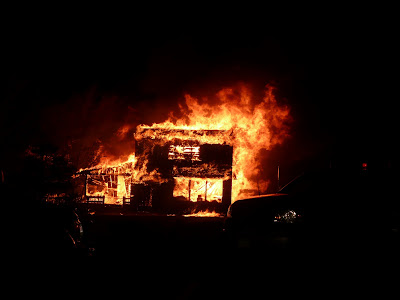 This was the scene across the street from Mamaw's house in the wee hours of Friday morning. A week ago, this building was a Mexican food restaurant, and home to some close friends. Farmdad traded salsa recipes with Rocky, Mamaw and Pam traded entire meals, Jazz provided teenage entertainment for everyone, and everyone traded jokes, stories, and general good times. These people were good friends to many in the community, good people. Rocky and Pam were always willing to help out their neighbors, and they always had a smile for a stranger. 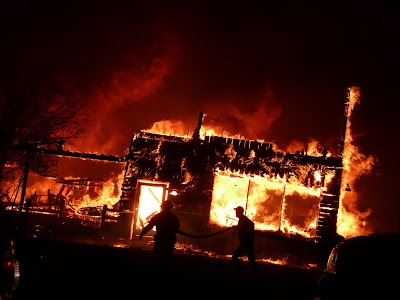 The Volunteer fire departments of five towns and two counties fought for hours, not to save the wooden building, there was no way, but to save the homes around it, including Mamaw's. The local police went door to door waking neighbors and evacuating them, going so far as to move vehicles for them, in conditions that can only be described as hellish. 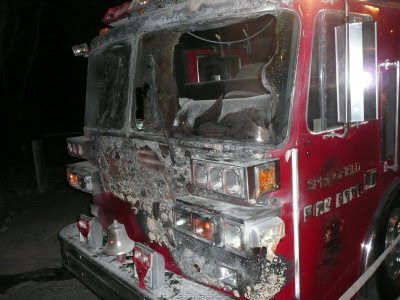 The fire burned so hot that it broke glass, and melted paint on the fire engines. They say that the fire sucked all the oxygen out of the area to the point that this truck wouldn't start so that they could move it. The firemen had to take a hack saw to the hose to get it off the truck.

People watched this scene Friday night, not knowing if their friends had gotten out. Four people were in the house, one made it out alive. I don't usually ask this kind of stuff, but please, if you pray, say a prayer for the friends and family of Rocky, Pam, and Jazz. And please, say a special prayer for Pam's mother, who survived the fire, but lost her family.

There are few people in this world with the kind of heart and generosity shown by this family, and their deaths mean a true loss to this community.
Posted by FarmGirl at 9:02 AM 7 comments: Links to this post