After listening to me whine about wishing I'd gotten a bigger tank for Bart, for multiple reasons, including but not limited to the fact that the tank I had couldn't be filtered effectively without tossing the poor fish around in the current, DM decided to be indeed darling (alternately read: got fed up with it) and while we were at Petsmart on another errand told me "Pick one, it's yours."

So I got this one: 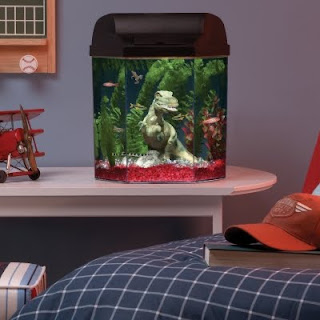 Minus the dinosaur decoration and the boy's room, of course, that's the product picture from Petsmart's website. Three more gallons than I had with an integrated filter system that is far more gentle (and surprisingly enough, effective) than the one I had for the old tank, so Bart doesn't have to swim his little fins off just to keep from being tossed all over.

The difficulty of keeping Bart's tank clean had caused me to try to introduce a rubber lip pleco in the old tank, which didn't last long, alas. I feel bad about it but all signs pointed to things being, if not settled, at least not murderous, when I abandoned my watch, only to come back and find the poor thing dead.

Did a little digging and found some tips on introducing new fish to a betta's tank, the best of which seems to have been to temporarily remove the betta and re-arrange the tank, remove or add decorations and move any that you leave in, to make it a new territory.

I wasn't entirely confident but the tank was to the point of having to clean it every couple of days, so I tried something with a little more protection and attitude next. I introduced a Cory Catfish, which managed to survive, either by dint of being faster than Bart or poking him in the snoot a few times with it's spines to teach him the error of his ways. Or both. Whatever it was, it worked, and he survived.

When I got the bigger tank, I added another Corey, since I had room, and named them Darrel and My Other Brother Darrel.

I also got three mystery snails cause they're reputed to be an awesome cleanup crew, more than for any real desire for them for themselves.

I've been pleasantly surprised, though, at the snails. They're far more interesting to watch than I expected... I got the mystery snails cause they're more fun to look at than the other species, expecting them to hang out on the walls of the tank and putter around not doing anything quickly enough to be interesting.

So now I have plenty to watch to keep myself entertained when I can't sleep, as Bart glides around the tank, the Darrels do their little catfishy searching for food in the crevices dance, and the snails do their thing, which sometimes, apparently, includes training jumps for the First ParaSnail Platoon.

Every so often they'll take it into their heads to turn loose of whatever they're clinging to and dive to the bottom of the tank. We're not talking fold up and fall down the wall, here, they always land more to the center of the tank. None of them has made it that far yet but they're definitely not just falling.

So far the most common time to see this behavior is about three to five minutes after I've put in some shrimp pellets. I'm assuming that as the pellets soften they release a taste or a smell into the water alerting the catfish and the snails that dinner is on, but around that time you'll often see one or more of the snails suddenly unass the wall of the tank and go diving for the bottom, only to race (and I use this as a relative term, they are, after all, snails) across it and pounce on one of the shrimp pellets.

They must be crack, or something, cause they'll push and shove at each other to get to them if one snail manages to cover up the whole hoard.

Here are a couple pictures of the black snail and the white one (they deserve names, I'm undecided between something extremely politically incorrect or something in keeping with the fact that they're MYSTERY snails...) today with the shrimp pellets: 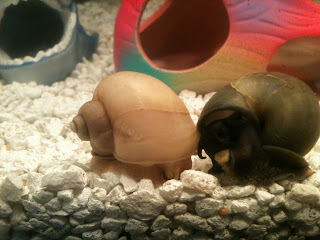 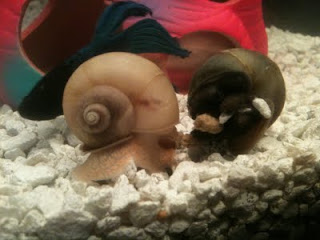 In the second photo, the white snail has actually pushed the black snail over, leaving it clinging to the few pieces of gravel it had been able to hang on to, and of course, the shrimp pellet.
Posted by FarmGirl at 11:01 PM 10 comments:

One of the babies that was claimed before he was even born is going to his new home tonight. We brought him over to Mamaw's to give him a bath and his first clip, and brought one of his brothers for company.

Fuzzy pup is a proud daddy and plays with the puppies every chance he gets, and today they all managed to wear each other out. 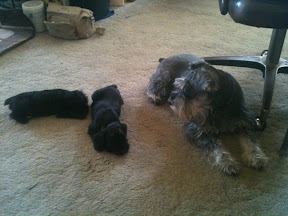 
As you can probably imagine I'm fairly useless at work. The restriction on lifting pushing and pulling has me knocked down to running the register and the plain fact is I can't handle standing for eight hours right now.

So I'm working three hour shifts covering here and there when it's busy and the day shifts would otherwise be alone.

Today shortly after I came in the new assistant manager called me over.

"Could you help me out for a minute? I know you're all retarded but I promise I won't break you any more."

On the bright side she's looking at making up a more permanent schedule for when I'm not broken anymore. I don't know how well it'll fly with the boss but her plan is to give me weekends off since I close most of the time.

Since we appear to be the perfect image of one of those couples in which the man wears the pants and the woman is the little lady who stays home and cooks and cleans etc (on the surface only anyone who knows us knows better) DM has been attempting to play the role of the Chauvinist Pig on occasion.

Problem is, he just can't pull it off. He'll tell me to make him a sandwich or something, and he can't keep a straight face. I can be in another room and I can hear the lack of a straight face.

About half the time he'll get halfway through with a straight face and then feel it going wrong and break off with a "Damnit, I thought I had it that time..."

He keeps trying though, he's determined that he's gonna make it one day, but until then, he's just my Male Chauvinist Guinea Pig.
Posted by FarmGirl at 10:07 AM 5 comments:

Got the new wheels today, a 2000 Ford Taurus this time.

And, to help ward off large game, Farmmom and I whipped up a special keychain for it.... ( ok, mostly Farmmom but I sanded off the worst of the sharp edges...) 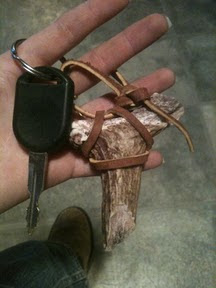 In a pinch, it would also make a fairly decent punch dagger. Mother Nature's Multitool....
Posted by FarmGirl at 7:08 PM 11 comments: