From my own family no less! It appears that after a long streak of not being able, for one reason or another, to keep my presents a secret, Farmmom went to great lengths (even recruiting my boyfriend to blatantly lie to me about being an anxious weirdo in order to find out where exactly my gun was) to keep this one secret.

See, it seems that EvylRobot conspired with her too. He sent her some leather, she did some tooling, sent it back, and he made a holster out of it. Throughout all of this several people managed to keep it a secret from me.

The finished product is nice: 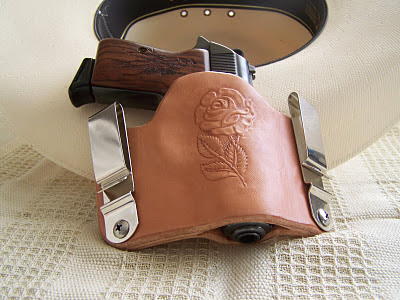 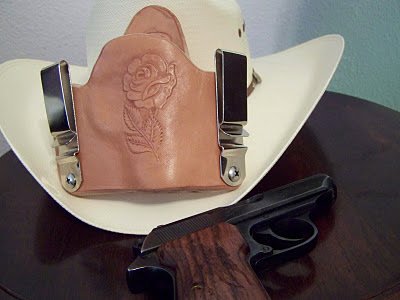 I was told I had to do a review, on top of being bamboozled by my dearly beloveds. What a world.

So far I'm impressed with the workmanship. Farmmom's tooling is great, the rose is one that I had admired a few times on a belt pattern (this is me sucking up to my mommy) and Robot's craftsmanship is good. There's gonna be a little fit adjustment as I wear the holster in... it's a little stiff to form to me where I prefer just yet, but the difference in position is about an inch, so it's not that huge a deal, as it breaks in a little I'll move it and it'll conform.

I like that the clips are reversible. I can wear it IWB or OWB and the swap is a couple of screws. The clips are also extremely sturdy and very much stay where they're put, which is a requirement. Also, I'm a big fan of where he put his logo. I don't mind advertising for him when I'm showing it off, but I like that it's covered when the gun is in the holster. It wouldn't work well with the rose on a full time basis.

It's pretty clear that Robot uses something with a texture as his backing when he works his leather.. there are some cross hatched markings on the back side of the leather, and an odd mottled texture behind his logo, all on the back, where it won't show, and will probably disappear with wear. Not a deal breaker on the holster, were I paying for it, but being as familiar as I am with leather and having a passing acquaintance with working leather, it's something I noticed.

I'll update more as I wear it and figure out how it's gonna break in. So far, in the adjusted position it's fairly comfortable, for a brand new holster about five times thicker than I'm used to, since my last holster for Walter was a floppy crappy thing.

I am very pleased with my sooper secret gift, though.
Posted by FarmGirl at 8:32 PM 7 comments: Links to this post