I've come to the end of my rope with Red. You've all heard me talk about him, and I've been honest. He's a pain in the butt.

Yesterday, he became a far more literal pain. When we bought him he was sweet on the ground, wanting petting and attention. The longer he's around the other horses, though, the more bad habits he's picking up.

Yesterday, while I was walking all seven of the horses we have on that place back into the pasture, since the wind had taken out a stretch of fence and they'd decided to wander a bit, Moonshine, my buddy S's young mare, decided that she needed one of the treats I was carrying, coming around in front of me and stopping broadside. Well, she's been started on cows, and that's how you do it. As a result, I had to pause my march and get her to move. The other horses were behind and to the sides of me, all stretching their noses to try to reach the bucket and grab a bite.

All, that is, except Red. He'd been pushed and jostled aside by the larger horses, and relegated to the back. Apparently he decided to remedy this by being a little asshole and kicking his way through. He must've connected with a tender spot on whatever horse was behind and to my right, because I felt a mighty shove from that direction and the next thing I knew, I was down on the ground.

As much as horses hate unsure footing, and people definitely are that, being quite squishy in most spots and not all that stable even where they aren't squishy since skin and clothes tend to move, accidents happen, especially when there's a lot of pressure behind and not much room to maneuver in front or to the sides.

I got stepped on, twice from the look of the bruises on my lower leg. I'm sore and the bruises are still developing, and are tender as all hell, but I'm fine. The worst I suffered is maybe a hint of a bone bruise in the spot that I actually remember feeling.

But Red... Red has got to go. He's not for us, but in a one horse family, or perhaps with a gelding buddy, he'd do all right. He's not for a beginner rider, but would make an excellent project horse for an intermediate rider.

He's butt ugly, to be frank, but strong as all hell and has the stamina to go all day long. He'd make an excellent endurance pony, as I have seen him lope for three hours straight, blow for five minutes (about the amount of time in a vet check in an endurance race if I'm not mistaken) and be shifting and dancing with his rider, ready to go again. He just doesn't wear out.

Here's a picture of him with a classmate of mine in one of the shows at the college, more pictures can be taken on request if anyone is interested: 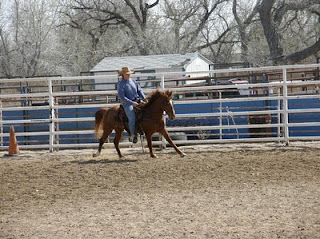 I'm asking $400, since that's about what I paid for him to begin with, and I'm offering him on the blog in hopes of finding him a new home without having to take him to auction. If he's not sold by April 29th, though, he is going to auction. I'll be riding the hell out of him until then, so he'll be reminded of the things he may have forgotten.

I don't expect to get an offer from this, believe me, but free advertising is free advertising. Contact me at my email address on the right if you're interested.
Posted by FarmGirl at 9:09 AM 10 comments: Links to this post