Yes, I said that, and yes it means what you think it means. I stole someone's ten week old kitten, with malice aforethought.

You see, they'd gotten her from one of the inevitable stray got a holt of fluffy pairings, the litters that get ignored until they're weaned, which is followed by a desperate attempt to give the kittens away.

So, right, they gave a kitten a home, awesome. Problem is, like so many kittens in a dusty clime that don't get much attention and ew get them out of my house they can live in the shed.... she had an upper respiratory infection. Which, by itself, is usually not a big deal. They're snotty and their eyes goober up for a while and then they get over it. This kitten, however, had a bad upper respiratory infection. Like, eyes swollen shut bad.

So, when I saw this, I told them "Take her out to the vet. He'll probably give you a fifteen dollar bottle of antibiotics for it. Last stuff I had to get from him smelled like bubblegum so it's not even hard to give."

And I went away for a week. The next time I visited, her poor kitten eyes were still swollen and goobered shut.

So I stole the cat.

That first trip to the vet, for the sixteen dollar bottle of liquid antibiotics (still the bubblegum, and before we finished all you had to do was shake it and she'd come running from the other end of the house) was just the beginning. A stolen cat always costs more than one honestly acquired.

Anyway, I brought the little bundle of fluff home and started getting her better, and it wasn't long at all before she felt better enough to show some personality. She liked mom, as all cats do those who are just allergic enough to be mildly miserable with prolonged close contact.

One night, my loving mother was sitting at the table, having a glass of wine, with the kitten romping and investigating and generally being a kitten in her lap. She looked down, and started to scold the little blue-eyed furball for nosing around on the table (an ironclad rule for all FarmFam animals, Thou Shalt Keep Thy Nose Off My Damn Table) and suddenly busted out laughing. Because, you see, the kitten had her head shoved into mom's glass of wine and was drinking it.

So that's how she got her name. Her Royal Highness Princess White Zinfandell. Ziff for short.

Ziff came to a truce with the FarmDogs of that era, though it was a cautious one. I don't believe she ever forgave them for thinking it was funny to nose her and knock her tail over teakettle when she was a kitten.

She slept on my pillow, in a c-for-cat fitted around my head and I learned to sleep with her that way because no matter how many times I moved her she moved back, and if I annoyed her enough she'd fall back on her first preference for sleeping position, which was draped over my face.

Once I relaxed to the inevitable, the purr vibrating through my head was actually sort of soothing.

She was three years and some change old (and had been through an eye surgery, the follow up of which caused her to lose her taste for being picked up and carried.... well, if you figured out that picking up meant getting steroid cream smeared in your sore eye would you like it??) when I brought home FarmDog.

At first, it seemed like Ziff was going to fall into the same wary truce she had with the other dogs, but it didn't take long for her to figure out a couple of important facts....

First, that FarmDog was a young and impressionable puppy.

Second, that if you bluff em hard enough when they're little, they'll believe it forever.

So FarmDog became Ziff's dog. Her favorite dog, privileged to be near Her Highness and tolerated to a greater degree than the others. This may have been Ziff's relaxing to the inevitable since it soon became clear that she was going to have to share the bed with the dog whether she wanted to or not.

Before FarmDog was even a year old, they had a grand relationship, to the point that while Ziff was sitting on the foot stool (AKA her throne) FarmDog could come up and rest her chin on it, without getting chased off.

Of course, it was fifty fifty whether Ziff would groom her nose and face or reach out with one majestic paw and sink all five claws into the top of FarmDog's head, to lift the loose skin there while watching dispassionately. I think it was a test of loyalty, personally. FarmDog got to where she never even twitched, just gave Ziff sad eyes till the cat got bored with it and settled down to grooming. FarmDog learned some tricks too. If Ziff ignored her when she came to The Throne, she'd wait patiently till the ignoring got pointed (in cat, that means turning away to groom yourself) and then lunge in for a full-body lick, and back out and away before she could be caught.

This usually resulted in whatever humans were present laughing themselves silly, and the cat giving an indignant glare at the room in general. And another Loyalty Test at the earliest opportunity.

Ziff is still with us, even though she's pushing fourteen. She's still spry, most days. She's an old cat though and has her stiff and sore days.

Since I got back to the Homestead her favorite place has pretty much been here: 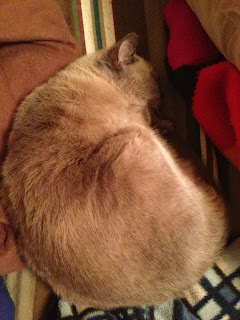 Curled up on my bed. Or, if possible, two feet lower, where I usually lean against the wall with my laptop. (Why yes, that is three different blankets you see on my bed. One of them is electric. I'm a wimp, I have never denied this.)

The Schnauzers seem to have convinced her that uneasy truce is the best way to go with dogs, though it may be that she's just that old and grumpy, but she hasn't been dealing with "her" dog the same way she used to. Unless they're doing their loyalty rituals when I can't see them. Or, her uneasy truce with Biter and Jezebelle may be because when she manages to catch a mouse, they steal it, and she's not sure she's got the vinegar left in her to properly lesson them on manners.

She's lost a lot of weight the last couple of years, but it's just being an old cat. I was sitting here looking at them, Ziff in the spot she'd claimed for herself, and FarmDog on any open spot of bed that she thought might not get reclaimed by me for long enough to start a good nap, and I realized that, once the next move is accomplished, these two probably won't ever be together again.

When I went to college, it was generally agreed that Ziff wouldn't cope well with a move. She's a strictly indoor cat, by her own preference. I tried to interest her in outside when she was young and she followed me out of politeness a couple of times, but always went back in with a look of "what in the world are you THINKING going out there?!?" at the first opportunity.

At this point, I'm pretty sure a move would kill her, just from the stress. Besides... she's lived in the same house for the vast majority of her life. She stayed when I left. While I'm sure from the instant recognition and resumption of me being her person when I came back (she still likes to sleep wrapped around my head and lounges on the back of my chair and attempts to annoy me into paying attention to her at every opportunity) she'd love to be with me, I don't think she would want to go with me.

And for all practical purposes, she's coming to the end of her run. She's still pretty happy, if a little slow and occasionally sore. She gets attention and food, and gets to annoy dad. She's got her picked people that she comes out for (yes, folks, she was in the house at Blogorado, she just chose not to make an appearance... too much bustle for her tastes) and they give her attention in the age old trade for cat hair.

But she's old. She's had a good run of it and I don't regret a second of it (even if the eye surgery thing freaked me out a little. Look, I know she was just anesthetized but mostly they look like they're sleeping then, and it's not all that freaky even if they are limp like a corpse. But limp like a corpse and eyes open and staring made me nervous. She looked dead, and I had to keep checking to make sure she wasn't.)

So she won't go with me on the next grand adventure, and there's a good chance that she won't be here the next time FarmDog makes it this way. Or hell, FarmDog is getting old too. She's getting white around her muzzle and on her feet that wasn't always there, and there's the seizure thing. It might be FarmDog that goes first. Either way, once I take the next step, it's probably the last chapter of A Cat and Her Dog.

Kind of sad, actually.
Posted by FarmGirl at 10:42 PM 5 comments: Links to this post