I've gotten a couple of questions about why I haven't posted a picture here. Part of it is for privacy reasons. But a big chunk of it is simply that I absolutely hate about 96-98% of pictures of myself.

Weird thing though? I like playing around with the self-timer on my digital camera. So, since I got one today out of sheer boredom that wasn't too bad, kinda showed my personality a little, and still pretty much protected my sooper secret identity... *snicker*.... (Hey, if I can't laugh at myself, then who can I laugh at?) I thought I'd go ahead a share with ya'll. 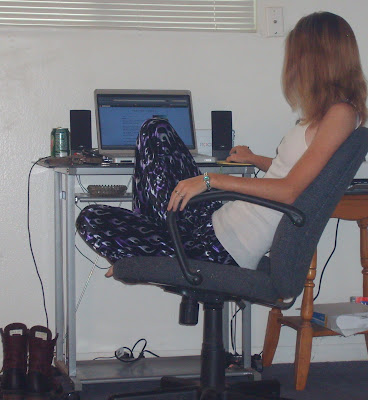 Have I mentioned that I'm a big fan of pajama pants and "wifebeaters" or "a-shirts" for at-home comfort?

P.S. Part of the reason this picture is so good at hiding the sooper secret Farmgirl identity is that you will almost never catch me with my hair down, especially outside. Ponytail or cheater bun (pull the hair up in a pony tail and then use the last wrap of the elastic band to create a "bun") is pretty much the order of the... well... always.
Posted by FarmGirl at 7:06 PM 9 comments: Links to this post

If you've got some free time, decent eyes, and want something interesting to do, why not head on over to Galaxy Zoo and help out science?

Galaxy Zoo is a massive project, utilizing the fantabulousness of the internet to assist researchers in classifying over a million galaxies from the Sloan Digital Sky Survey. They show you how to identify the different types of galaxies, common optical illusions created by stars, satellite reflections, and what to look for if two galaxies are merging.

It's contributing to science, people!

Plus... the pictures are so pretty!

Admittedly, some of them aren't so pretty and it's hard to tell through the blur what you're looking at, but some of them... well... they're gorgeous....

This one I stole from the tutorial page, but you run across some of them yourself, too.

Go check it out, contribute a bit, and see some pretty shiny things way off in space!


*Edit: I fixed the link, folks. Many apologies for the bad link, if you tried it before... well, it works better now. My bad...
Posted by FarmGirl at 2:45 PM No comments: Links to this post

I've been thinking about the girl in my previous post, and our society, quite a bit lately. So, lets start off with a thesis statement, since I've also been doing a lot of reading in my Lit book lately...

Racism in the United States, while not as rampant as in the past, has not vanished, no matter how much certain elements in our society would like us to think that it had.

Witness little miss racist, and her unapologetic apology. Frankly, the girl makes me want to beat her with a stick. But, she is a valid proof that racism is still here.

I noticed when I read the comments on that post that very few people addressed the racism issue, now, whether ya'll were ignoring it as she probably deserves to be ignored, I dunno. But, it seems to me that its a mirror of our society, so many people working so hard to believe that we're magically past all that crap that they refuse to see that it's still out there. Of course, the reverse is true as well, so many people so rabidly anti-racist that they attack anyone who doesn't precisely toe the PC line.

Hell, after my post of that forward Farmmom sent me, someone insinuated on their blog that I'm a member of the KKK. I ignored it because I didn't figure it was worth trying to explain to someone who has pre-formed an opinion of me that if they actually had thoughts of their own they'd realize that the post was anti-racism in and of itself, its just against all racism, and not just that towards minorities.

Yes, there are those in our country who are racist in the "traditional" way, who join the KKK or the Aryan Brotherhood, and turn "white pride" into something to be ashamed of, in the eyes of the rest of the country.

But, what about the people, members of minority races, who spend most of their free time talking about how bad white people are? Come on people, that is racism too. Just because they've got a coalition or a bunch of lobbyists doesn't mean its not racism. I'm not saying that all people of an off-white or brown skin color do this, so no one jump me in a dark alley or anything, but I have personally witnessed it.

Why is it that our society can't wake up to the fact that racism is racism, regardless of the color of the bigot and the target? Why is it that when I say I'm proud of the heritage that gives me a ghost-like paleness anywhere that I don't regularly get sun, I'm accused of being a racist myself, in spite of the fact that I'm just as proud of that small portion of my heritage that allows me to shrug off sunburns like they're nothing? (Which, by the way, I believe comes from the Native American portion of my heritage... small, but enough.)

Until the day that everyone, not just white people, stop looking at skin color to judge a person's worth, we still have racism in our society.

And yes, I'm using the word "black" so sue me. Its a descriptor, not a slur. I refuse to use words like "African American" "Asian American" etcetera. Why? Because you're either American or you're not. The only PC title that is even remotely deserved is that of Native American, and thats not even entirely true, because even they immigrated here! They just did it before the Europeans got here.

Stop separating and labeling people. If their skin color is that of a good dark chocolate, and you need to describe that, "black" is the term for it. A white person calling someone an African American doesn't change the fact that when he or she gets home, they're gonna look at their boyfriend/girlfriend/husband/wife/parents/roommate and call themselves black.

I'm calling for an end to the double standard, for as much good as it will do. Our society needs to stop placating people in minorities in order to appear broad minded. It's not broad minded when you treat certain people with respect, civility, and honor, but pretend that other people aren't being insulted in the same way that you were protecting the first group against.

So what say we stop worrying about what PC label is appropriate this week, and start collectively punishing all bigots in the time-honored traditions of society?

Shun them, chastise them, make it clear that as a society we will not tolerate bigotry in any form, from any person.

If they cannot get along in the "mainstream" of society, they will seek out others who agree with them, of course. But at least they won't be slapping us in the face with their offensive behavior.
Posted by FarmGirl at 7:56 AM 10 comments: Links to this post