No, I'm not talking about the recent legislative change that made it legal to have five marijuana plants for personal use. Even if I were into the whole pot thing, I'd be leery, since there still isn't any legal method to acquire said plants. 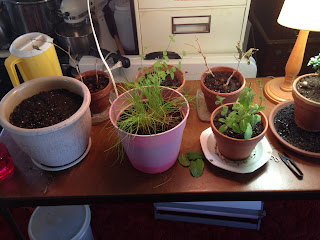 That's my plant table. This spring Farmmom decided she wanted to start some of her own seeds, and since the spring here is unpredictable, that meant starting inside. So she bought a little flourescent fixture and a plant bulb, to put over her little plastic seedling greenhouse.

Then I got Tiny Tim, my tea tree (yes that's him in the far right, with his own lamp, because he wasn't always on the table) and discovered that some of the creepy crawlies around here just love him, so outside for some Colorado Sunshine wasn't an option unless I wanted fuzzy white bugs all over him instead of pretty white flowers. So he got a lamp.

As the summer progressed I made use of the plant light for my fruit tree cuttings (some of which are in the back there, hopefully making roots for themselves... if not, I'll just have to get new cuttings in the spring, cause I want tiny mulberry trees damnit!) and a couple of mom's potted plants that were ailing. Those eventually gave up the ghost, but they were older plants and had survived longer than we had expected them to anyway.

Since it's looking like things will be moving forward on the roof at the farmhouse, and the move to the hermitage is more imminent all the time, I've been plotting on food plants that can be grown in pots. See, the farmhouse has a lovely porch with tons of windows. With a little help in the lighting department over the winter, it'll be a great space for having such food producing plants as can thrive in pots all year round.

So far, I've managed to get chives and mint established. The pot of mint I found for three dollars turned out to have two plants in it, so of course I split them.

What's with the empty pot on the left you ask? It's not empty, I answer. See, we had a head of garlic sitting around left over from pickling. When I went to use some for a pot roast I was throwing together yesterday, it was showing signs of imminently sprouting. So what I didn't use, I stuck in a pot. So that will eventually be several heads of garlic.

When it's a sixty mile round trip to the store, it's worth growing whatever you can yourself. 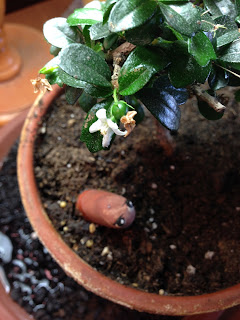 A flower and a berry side by side. That berry will turn red for a few days, then start shrinking and and drying up. The little white flowers are pretty as a picture... though not pretty enough to reassure Concerned Worm, as you can see.

So far, there's far less bonsai to Tiny Tim than you would expect. I do a little clean up on his leaves now and then to make sure he's getting plenty of light, but mostly I just water him and let him do his thing. If I wanted him at the height he is now, that would be a different story, but for now he's got some growing to do, and he'll do it best without a lot of interference.

All in all I've had better luck than I expected to with my potted plants, and I'm really enjoying them.

We had a mulberry tree growing under our eaves up in wisconsin, which was a distinct no no. I transplanted it and it seems to be growing well. With any luck, in a few years we'll have mulberry production to supplement the two giant walnut trees and the huge pecan tree. I'm a little put off that I wasn't able to be around for the nut harvest.

We have several mulberries in different spots. They were a favorite of the great-grands, and they do well here in spite of the drought as long as they're well established.

I want to get several cuttings going, for one to clone the trees we have and re-plant, and for another so I can habe bonsai mulberries, because tiny fruit trees damnit!

If I get another volunteer mulberry, I'll bring you one

'preciate it Jenn... I'm still gonna be trying for cuttings off the trees we've got. 'Cause they're ours, if for no other reason.