A lot of people talk about their knives. I've never really talked about mine, since it's less of a toy and more of a tool, for me.

See, everyone in my family has always had a pocket knife on them. Except for, for a few years, me. For a few years, I was in high school, not cutting twine, etc, and got tired of having the slip-in-the-front-pocket style knife jabbing me every time I sat down. So I quit carrying one.

Fast forward to my 18th year, when I started working road construction. Farmmom and I were running across a lot of situations that required a pocket knife, as you do when you work outdoors... and I didn't have one.

So, Farmdad dug in his myriad of knives and tossed me this one: 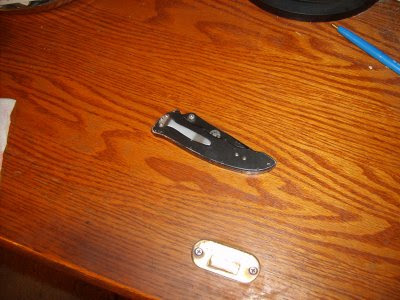 I had planned on carrying the big chunky thing for a few days, until I could find, and purchase, something of my own. Then I became comfortable with it, and I kept forgetting to get a new knife... and then I began to love it.

It's big, it's bulky, but it's my knife. After four years of every day carry, various cutting and hacking activities, that knife is nearly as much a part of my ensemble as my rings. I don't wear it when dressed up, but that's about it.

The clip allows me to slip it into my back pocket, clipped over the outside of the pocket, and know exactly where it is at all times, unlike the no-clip models I'd tried before.

In this picture you can see two places on the grip which look like there ought to be something in them: 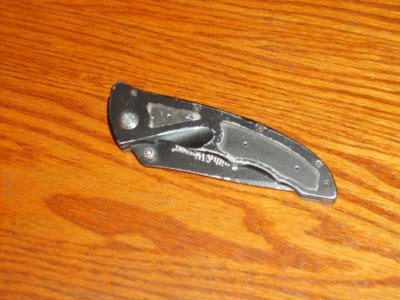 There used to be. Those slight hollows used to be the home of two pieces of fancy skateboard tape... on steroids, I guess. It was the same style of "grip" material, except more so. They were glued in with something that seemed to be a molecular bond... and I wore them out. Not only did I wear them out but they came loose in the middle, first. Not as surprising as it might be, considering the small screw holes that they were concealing. I have no idea what was intended to be screwed into those holes, but they're threaded and everything. The grippy-bits been gone for a couple of years now.

The finish is beaten, battered, scratched, worn away, and otherwise abused, as you can see. But the blade is just fine: 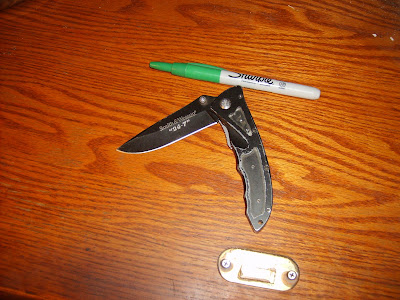 The blade lock has never malfunctioned on me, opening or closing, and while it has been sharpened with everything from a restaurant grade motorized knife sharpener to a steel from a high-end set of kitchen knives, it's always gotten the job done for me.

No matter whether the job is cutting twine, re-adjusting a loose screw, prying open a paint can, picking muck out from under my fingernails, trimming a mane, removing cockleburrs from various of my furry children, or, once, as a visual aid during an offer to cure that whole "testosterone" problem, this knife has gotten it done.

I can operate it one-handed, despite its size, and wouldn't trade it for all the shiny little toys in the world.
Posted by FarmGirl at 7:30 AM

The most important thing- you are comfortable with it! Until the advent of "tactical" knives, I carried a Case Sowbelly for many years, then Bucks in my flight suit in addtion to the Case. Now it's either a Benchmade or Kershaw pocket clip all the time.

I'm glad you love your knife; my wife tells me I've never met a knife, gun or flashlight I don't like. I got my first one when I was 8 years old, and have a Benchmade (excellent knives by the way) mini-Griptillian in my pocket as we speak. As I always tell my kids: 'knives are our friends'

I've carried a Buck lock-blade for decades. Once, I thought I'd lost it and bought another like the first. A few days later, I found my knife.

I now have my knife---and a spare. I bought a smaller version of mine for my wife not long after I bought my first. She still carries it.

I had an older Swiss Army Executive I carried for 20+ years, finally gave it to my daughter. Still miss it. I gave it to her because I bought a Case on impulse and starting using it during hunting seasons and did not have room for the swiss, the case and a micro tool I carry also. I thought it might be of value someday to her, it did make a world cruise with me before I retired from the Navy and has been places she wants to go too. Some she don't also.

I think there's a lot of truth in the old words, and carry a couple of lockback knives, a small Browning and a bit bigger Dozier Design by K-Bar. Got some more hanging around too.

Also, don't forget the old adage, "Don't bring a knife to a gun fight." Knives are backup in case all else fails. But use the proper tool for the proper job.

I've carried a knife every day since I was about 16. One of the funniest things I hear from people about my carrying it (it's clipped to my front pocket, so it's not like I'm hiding it) is "why do you always carry a knife?"....they usually ask me that after they've asked to borrow it for some little chore. Makes me crack up every time.